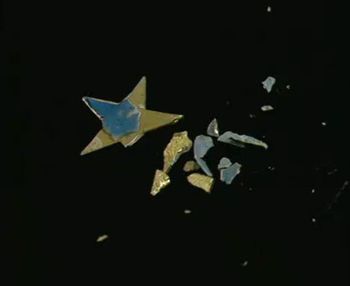 The rest... is silence.
"Now I'll never know if I was right."
— Adric's last words.
Advertisement:

The one where the Soldiers of Steel return after a seven-year absence... and the rest is silence.

One of the biggest Wham Episodes Doctor Who has ever had. While its plot twists are common knowledge among fans by this point, it's considered no less impactful even today.

Lieutenant Scott and his squad of troops climb up a bleak hillside on Earth, escorting Professor Kyle, had been part of a scientific expedition investigating the caves for fossil remains, to a camp set up by Scott's team. They find that Kyle's fellow paleontologists have gone missing. They're also followed by two shadowy figures.

Meanwhile, in the TARDIS, the Doctor and Adric are having a rather childish argument. Adric feels that he's being bullied, ignored and treated like an incompetent underling, and wants to go back home to E-Space. But the Doctor thinks it's too dangerous as E-Space is... E-Space. Either way, the Doctor materializes the TARDIS on 26th century Earth in a cave system and goes out for a little sulk. Nyssa and Tegan join him, pointing out dinosaur fossils in the walls as they go. (As they discuss the fossil, we even hear the first xylophone riff from the "Fossils" movement of Saint-Saens' Carnival of the Animals.) The Doctor mentions that he's always wanted to know how those dinosaurs died out.

Back with the missing-palaeontologists plot: the troopers decide to split up into multiple groups and explore deeper into the cave system. They even pick up a few life signs — one of them with two heartbeats. The leader of this group naturally assumes that the owners of these strange life signs are responsible for the palaeontologists who went missing, but they don't have much time to act on this before they are, sadly, turned into sludge. The survivors, led by Scott, stumble across the Doctor and the TARDIS and immediately relate their problems... until, that is, they notice that the Doctor, Tegan and Nyssa make great suspects. Before either group can make their case, however, those shadowy figures attack: Androids! Androids commanded elsewhere in a distant location by... Cybermen!

Adric wanders out of the TARDIS and is nearly killed by one of the two Androids attacking everyone else, giving them a chance to take the Android out. The second one falls soon after, but the Doctor realizes that those who controlled the Androids were sending some sort of transmission to a hatch built into the cave. Opening the hatch, the Doctor is shocked to find a bomb has been set by whomever started this mess. The Doctor fiddles around with the bomb in an attempt to deactivate it, but actually activates the bomb with his fumblings and it takes the combined efforts of the Doctor and Adric together to turn the bomb back off again.

The Cybermen, for their part, realise that the Doctor is involved after seeing the TARDIS while reviewing the recorded images transmitted by the androids. They start preparing for his inevitable meddling as well, but not before the Cyber-Leader decides to show the audience some footage of the First, Second and Fourth Doctors from some of their Cybermen-oriented adventures.

The Doctor, satisfied with his deeds in the cave, ushers Adric, Nyssa and Tegan (as well as a few surviving humans from the cave) into the TARDIS. He decides to go trace the signal sent by the Cybermen to the Androids and the TARDIS materializes upon a freighter ship out in space that's suffered many random murders aboard during their travels to Earth. Almost immediately after stepping out of the TARDIS, the Doctor and Adric stumble across two dead bodies. Of course, the crew finds the Doctor and Adric standing over the bodies and blames them for the murders.

The Cyber-Leader chooses now to take over the freighter, and activates a unit of Cybermen. They hatch from their tombs and begin to stomp all over the ship as the Doctor and Adric are taken to the Captain, a middle-aged woman named Briggs who has the rare talent of sounding eternally drunk. One of the Cybermen bumbles onto the bridge and is instantly killed, only for the security chief to conveniently declare he's a double-agent for them. The Doctor and Briggs barricade the bridge by shutting the doors and Captain Briggs at first seems confident that they can survive to Earth... until she realizes that there must be around 15,000 Cybermen on the ship, hiding in her ship's cargo.

Meanwhile, the people stuck in the TARDIS decide to go see what happened to the Doctor and Adric, only to find a few Cybermen running around. Tired of waiting around, Tegan joins them and shows she Took a Level in Badass somewhere along the line when she kills a Cyberman with its own gun. Back on the bridge, the Cybermen nearly break through by melting one of the doors... until the Doctor manages to re-solidify said door around a lone Cyberman. Of course, the Cybermen just blow up the other door and take the bridge anyhow. Bragging, the Cyber-Leader activates all the remaining Cybermen on the ship, proudly announcing how he's won the day — but not before killing off the security chief under the mistaken belief that he attempted to hide the existence of Scott and his troopers, proving that bad communication really does kill.

Finally, the Cyber-Leader announces his plan, which is so vast that it requires about 15,000 Cyber units. There is a massive meeting of governments taking place of Earth, which will unite all those peoples against the Cybermen. So the Cybermen have decided to break up the meeting, which makes sense. Turns out that little shoebox-sized bomb the Doctor deactivated in the caves was powerful enough to destroy everyone and everything on the planet's surface, proving that the Cybermen firmly believe that There Is No Kill Like Overkill. The Doctor thwarted their attempt to detonate the bomb, but the Cyber-Leader has a contingency plan — crash the freighter into Earth, and the explosion of its antimatter-fuelled reactor will have basically the same result.

Regardless, Tegan is captured and dragged to the bridge while Scott and a few other humans run around blowing up Cybermen... but spending most of their time hiding from them. The Doctor makes a show of bravado until Tegan is threatened, and the Cyber-Leader claims that this is the weakness of organics. The Doctor claims otherwise, wondering when the Cybermen enjoyed the laughter of a child or sat down to have a nice meal together. The Cyber-Leader also heads out to the TARDIS to make his escape with a few other Cybermen. At this time, Scott's Commandos break onto the Bridge and pretty much slaughter most of the Cybermen there. Unfortunately, Adric's attempt to bring the freighter out of hyperdrive goes spectacularly wrong and sends the freighter careening back in time, meaning that the Earth of the future may be safe but the Earth of the past (and thus, all future) is now in danger.

Adric decides to stay at the control console, trying to fix the problem before everyone dies. Scott's Commandos and Captain Briggs instead leap out into escape pods, while the Doctor and the two ladies head out to recapture the TARDIS from the Cybermen. Inside the TARDIS, the Cyber-Leader holds the Doctor and companions at gunpoint while they talk for a good length of time. The Cyber-Leader brags about how Earth will be wiped out, but the Doctor then realizes that they've gone back in time just over 65 million years. This means that the dinosaurs were wiped out by the freighter/bomb combination rather than any meteor or asteroid... but no one remembers to tell Adric this, and he is feverishly crunching numbers in an attempt to stop the ship.

Fed up with the talking, the Cyber-Leader decides to kill the TARDIS crew, but Tegan jumps on him and the Doctor breaks up Adric's golden badge all over its chest unit, but not before it shoots and damages the TARDIS console. And then the Doctor grabs the gun and shoots the Leader, killing it. Adric, for his part, is nearly done screwing up history when a lone, near-death Cyberman prevents him from entering the calculations by blowing up the console. The Doctor knows he can't save Adric, and we watch Adric's ship ram itself into the surface of the Earth, killing off all the Dinosaurs and making way for Man... with Adric along for the ride.

Tegan and Nyssa hold each other for comfort as the Doctor can only look on at the screen helplessly. Silent credits roll over Adric's broken badge...