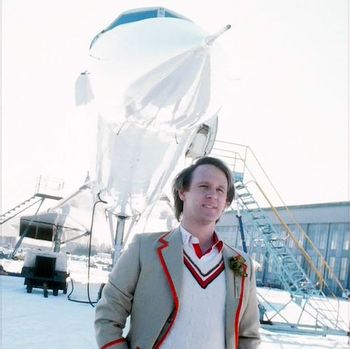 Sorry Peter, but you're still riding coach.
"It means the Master has finally defeated me."
— The Doctor (having a sudden attack of Genre Blindness)
Advertisement:

The one where the Doctor regrets losing the scarf.

Mostly notable for being the first time British Airways allowed filming aboard a Concorde,note For the benefit of our younger tropers, Concordes were supersonic passenger aircraft, which never really became popular due to financial and practical issues. "Time-Flight" is one of the sillier stories of Classic Who.

Following the events of Earthshock, the survivors from the freighter have been returned to their own time and the remaining Cybermen have dispersed. But Adric is dead and Tegan, on the TARDIS with the Doctor and Nyssa, pleads with the Doctor to go back and rescue him from the freighter before it crashes into the prehistoric Earth. However, the Doctor says the Laws of Time mean this is impossible and the only thing he and his remaining companions can do for Adric now is try to get on with life; he suggests they take some time out to go to the 1851 Great Exhibition.

Instead, they accidentally end up at Heathrow Airport. Tegan's happy to be finally back home, and the Doctor, checking the paper for the latest cricket news, avoids arrest by being incredibly smart and simply telling the airport crew to call UNIT and verify his credentials. When asked, UNIT immediately tells the airport's board members to do the smart thing and brief the Doctor on the bad stuff occurring - namely the mysterious case of a missing Concorde.

As it turns out, the Concordes are suddenly vanishing to the Jurassic era, so the Doctor, Nyssa, and Tegan follow the same flight path aboard a second Concorde, and appears to land safely back at Heathrow. However, the Doctor, monitoring the flight in the TARDIS, reveals they are 140 million years in Earth's past; a strong psychokinetic field is projecting the illusion of Heathrow to the humans. Outside, they spot the first Concorde, its crew and passengers under the assumption they are at Heathrow. However, they are performing slave labor under the control of Plasmatons, humanoid blobs of protein held together by the psychokinetic field.

One of the passengers, Professor Hayter, reveals he had seen through the illusion, and explains that a mysterious Oriental-like mystic named Kalid is controlling the psychokinetic field from a nearby Citadel, brainwashing his fellow passengers to try to break into a central chamber contained at the Citadel. As they learn of these events, they observe the passengers taking the TARDIS back to the Citadel.

As the group approaches the Citadel, Nyssa develops an empathic connection with the energy source, and Kalid erects a psychokinetic shield around her, preventing her from moving. As Tegan stays with her, the others continue on. At the Citadel, the Doctor goes off alone to find Kalid, learning that the mystic is seeking to gain direct access to a power source within the central chamber. When Stapley, the second Concorde's captain, and Hayter start to disrupt Kalid's control on the passengers, Kalid redirects his psychokinetic field to enforce the illusion; this causes the field around Nyssa to fall. Nyssa and Tegan continue to the Citadel. Along their way, Adric shows up, previously believed to have been killed, who warns that he will die again if Nyssa and Tegan continue onwards, and urges them to retreat. However, Nyssa outs Adric as a mere apparition upon noticing his gold star-shaped badge, which the Doctor destroyed when he lethally grinded it into the late Cyber-Leader's ventilation unit aboard the TARDIS. Knowing this, they press on, causing "Adric" to dissipate.note For anyone wondering why he was there in the first place, it was both to fulfill Matthew Waterhouse's contract with the BBC and maintain the surprise of his death in the previous serial. Due to Nyssa's empathy, the two are able to enter the central chamber without obstruction. Nyssa, acting on instinct, throws an artifact into a large object in the chamber, causing a surge of power that disrupts Kalid's energy source, revealing him to be, to no-one's surprise except the Doctor's, the Master back again.

The Master explains that he barely escaped from their last encounter in Castrovalva, his TARDIS damaged in the journey. Now stuck in Earth's past, he seeks to use the power source in the central chamber to power his TARDIS and escape, and is using the passengers and crew of the Concorde to break into the chamber. The Master uses the Doctor's TARDIS to try to access the central chamber directly, while the Doctor, along with Hayter, find that the passengers have successfully broken through, and enter the chamber directly, rejoining with Nyssa and Tegan. They find that the energy source is really a gestalt intelligence of a great number of members of the Xeraphin species; their species were targeted in the crossfire between two other warring species, and they had tried to escape, but instead crashed to Earth, where the radiation of their damaged ship wracked their bodies, forcing them to take the form of a Hive Mind within the gestalt. They had constructed the Citadel to house the gestalt until the radiation had waned. However, when the Master arrived, his presence caused the gestalt to become unstable and causing a split personality within it, one evil side willing to help the Master, the other good side seeing his villainy and trying to stall the Master's actions.

The Master finds he is unable to access the central chamber with the TARDIS, and instead creates an induction loop to transfer the gestalt to his own TARDIS with the aid of the evil part of the gestalt. The Master attempts to leave but finds several parts of his TARDIS missing, taken earlier by Stapley and his crew, and though he replaces them with some from the Doctor's TARDIS, still lacks a critical temporal limiter. The Master offers a deal with the Doctor for a temporal limiter in exchange for the other parts he took and releasing the humans from his control. After installing the device, the Master departs in his TARDIS. The Doctor quickly instructs the humans to return to the second Concorde, and then uses his TARDIS to guide the aircraft back to contemporary times at Heathrow.

Finally, thinking that he's finally gotten Tegan home at last, the Doctor leaves her there — unaware that she was having second thoughts about the job and really wanted to stay aboard the TARDIS. They'll pick her up again almost a year later from her perspective. The Doctor and Nyssa will go on to about two dozen adventures in between.note Thanks to Sarah Sutton being the only Fifth Doctor companion actress - besides Nicola Bryant (Peri) - regularly available to Big Finish for many years, Five and Nyssa had a long run as a duo.

Stapley: I thought you were going with The Doctor.
Tegan (bitterly): So did I.