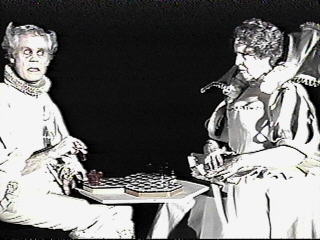 King me.
"An apple a day keeps the... Ah, never mind."
—The Doctor
Advertisement:

The one where Adric pretends to be an idiot.

The TARDIS arrives on the planet Deva Lokka, where the peaceful native Kinda are being screwed with by an imperialist human expedition. (They even wear pith helmets.) The expedition has been reduced to three people: Sanders, the bluff leader; Todd, the kind scientist who wishes she could get closer to the Kinda; and Hindle, the security guy, an already mentally unstable jobsworth who is being bullied into utter insanity by Sanders. The rest of the expedition seems to have gone missing entirely (which doesn't help Hindle's mental state).

Nyssa is suffering from a mysterious mental clouding (well, from not being added as a series regular until after the script was finished), and gets to stay in the TARDIS for the whole story. Tegan falls asleep under some magical wind chimes, and finds a tremendously sinister guy called Dukkha invading her Chiaroscuro dreamscape. He proceeds to Mind Rape her for two episodes until she finally agrees to let him possess her body.

Meanwhile, the Doctor and Adric encounter the expedition. Sanders leaves to explore, and Hindle promptly goes utterly batshit and has the Doctor and his new friend Todd imprisoned because he thinks the plants are plotting against him and the Doctor and Todd are in on it. Adric goes over to Hindle's side, although at least this time his decision to side with the villain is clearly because he's humouring Hindle and hopes that he can stop him from doing anything too horrific.

Sanders ventures out in a sort of human-sized mecha and encounters Panna, a Kinda shaman, and her apprentice Karuna. It turns out that the Kinda are matriarchal, and only the most powerful women can speak, the men and weaker women communicating by telepathy. They give Sanders the Box of Jhana, a Kinda artefact that they think will hopefully communicate the Kinda worldview to him and make him and the other humans leave. However, it regresses him emotionally to the age of about ten. He takes the box back to the base, where Hindle forces the Doctor to open it to see what it will do to him. It gives the Doctor and Todd a vision of Kinda culture, and luckily fails to drive them insane as well. Hindle also manage to enslave some Kinda by making them look into a mirror, tricking them into thinking he's captured their very souls in the reflective glass.

The now-possessed Tegan encounters a Kinda man, Aris, and transfers the possession (marked by a living snake tattoo) to him. He develops the ability to talk, and incites the confused Kinda to violently assault the human base. Meanwhile, Hindle and the childish Sanders have wired the place to explode rather than let themselves get taken. They then start playing like little boys with a model city.

The Doctor and Todd escape from the base and meet up with Panna and Karuna. Panna tells them that the evil snake force that has taken over Tegan is the Mara, an evil entity that feeds off destruction. It also turns out that the Mara will take over any non-telepathic entity that uses the wind chimes for visionary dreams, so it's all the Doctor's fault for letting Tegan sleep under them. She shows the Doctor and Todd a vison of the horrible things that will happen if the Mara isn't stopped, and then drops dead. Fortunately, thanks to Kinda telepathy, Karuna gets her memories and merges Panna's personality with her own.

The Doctor, Todd and Karuna find Tegan and wake her up. She thinks she just had a horrible nightmare, but they explain to her how badly things are messed up. They all reach the human base in time to see Aris and the Kinda attack it. Adric hold them off using the brain-controlled mecha, which promptly Mind Rapes him because he doesn't know how to use it properly. (Yes, there's a lot of that in this story.)

Todd manipulates Hindle into opening the Box of Jhana himself just as he is about to blow everyone up, and the experience shocks him back to sanity. The Doctor and Karuna then get the Kinda to help them trap Aris in a circle of mirrors (solar panels from the base) and the Mara leaves his body, materialises as a snake, and dies. Because evil can't take seeing itself reflected.

A now-sane Hindle and Sanders reconcile with one another and decide to be nicer people in future, and all the humans decide to declare the planet unsuitable for human colonisation so the Kinda will be left in peace. The Doctor declares that the Mara has been defeated, a bit prematurely. The Doctor and companions leave for further adventures.

A number of 1963-1989 Doctor Who serials' home media releases give viewers the option to watch the stories with redone/upgraded special effects. Shown here is a comparison between the broadcast version of "Kinda" and the enhanced version on the 2011 DVD, which replaces the Mara's rubber prop with a more animated CGI snake. This clip is taken from the now-dormant official YouTube channel for the Classic Series.

Example of:
Enhanced on DVD

A number of 1963-1989 Doctor Who serials' home media releases give viewers the option to watch the stories with redone/upgraded special effects. Shown here is a comparison between the broadcast version of "Kinda" and the enhanced version on the 2011 DVD, which replaces the Mara's rubber prop with a more animated CGI snake. This clip is taken from the now-dormant official YouTube channel for the Classic Series.