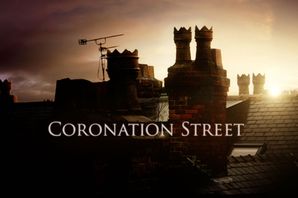 "Now the next thing you've got to do is to get a sign-writer in — that thing above the door'll have to be changed."
— First line of the first episodenote not counting some children singing a playground rhyme
Advertisement:

Coronation Street (or Corrie) is a British Prime Time Soap on ITV, which follows the ups and downs in the lives of the residents of a typical working-class street in a Salford, Manchester neighbourhood.

It has been running for a very, very, VERY long time, first airing on 9 December 1960, and will probably keep going until the end of time. It has been running long enough that a character in their eighties may originally have been introduced as a sexy young twentysomething, or one in their mid-fifties may have first appeared as a newborn baby. Many assume (thanks to ITV, who is to blame) that it is the longest-running soap in the world, but The Archers (which began on BBC radio in 1952) would likely say otherwise.

What Coronation Street can claim is that it is the longest-running soap opera on television.note This record became available in 2017: Guiding Light spent from 1952-2009, 57 years, on television, with Corrie's 2018 being its 58th year. It will not, however, be able to claim to be the "longest-running soap" title until the BBC cancels The Archers. Also viewable in Ireland, Canada, Australia, and New Zealand. Curious Americans can watch it on Hulu (or the CBC, if they can receive it).

The show is often on about five times a week (as do most British soap operas) and has an omnibus at the end of the week. The series began showing at least two a week, and has gradually increased throughout its run-time. In the summer of 2016, it was announced that their schedule would be increased to six episodes a week in the autumn of 2017, and the television set was going to be extended.

Classic user of the Soap Wheel.

Please Note: As an ongoing soap with no reruns outside of the weekly omnibus, spoilers will not be tagged unless they refer to events that have yet to happen on-screen.

Um, well, most of the tropes in The Catalogue by now, given the longevity of the series. More than once, in many cases.