Series / The Courtship of Eddie's Father 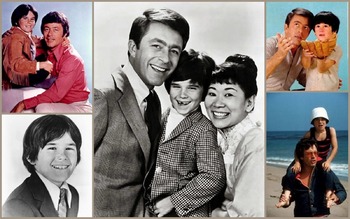 The Courtship of Eddie's Father is an American sitcom that originally ran on ABC from 1969 to 1972. It centers on Tom Corbett (Bill Bixby), a widowed magazine editor doing his best to raise his son Eddie (Brandon Cruz) as a single parent. Supporting him in this effort are Mrs. Livington (Miyoshi Umeki), his Japanese housekeeper; Norman Tinker (James Komack), his best friend and the magazine's photographer; and Tina Rickles (Kristina Holland), his scatterbrained secretary. The overriding arc in the series focused on Tom's attempts to find a second wife, and by extension a mother for Eddie.

Adapted from the 1963 film of the same name directed by Vincente Minnelli, starring Glenn Ford as Tom and Ronny Howard as Eddie. The film was itself based on a 1961 novel by Mark Toby.

People, let me tell you 'bout the tropes here: