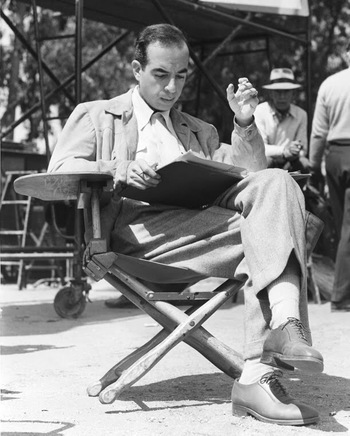 "Color can do anything that black-and-white can."
— Vincente Minnelli
Advertisement:

One of the leading directors in The Golden Age of Hollywood, Vincente Minnelli (born Lester Anthony Minnelli; February 28, 1903 – July 25, 1986) was to The Musical what John Ford was to The Western.

During his 30-year career, he directed such films as Meet Me in St. Louis, The Band Wagon, An American in Paris, and Gigi, perennial classics (and, in the case of the latter two titles, Academy Award winners for Best Picture) that remain widely viewed, starring the likes of Fred Astaire, Gene Kelly, Cyd Charisse, Leslie Caron, Maurice Chevalier, and, of course, Judy Garland. It was Minnelli who offered Garland her first adult role in Meet Me in St. Louis, doing much to get rid of the terrible makeover that Louis B. Mayer and MGM had imposed on their child actors. While making that film Minnelli and Garland fell in love, got married in 1945, and had daughter Liza the following year. (They divorced in 1951.)

Minnelli tends to get overshadowed by both wife and daughter but later generations of movie buffs would remember his incredible technical achievements, his use of camera movement, and powerful blocking-out of action in his scenes. His staging of musical numbers is notable for being highly cinematic, achieving results only possible with seeing a number on-screen, and integrating the number as part of the whole film, using it as important moments of character and dramatic conflict which was quite innovative at the time. Above all his use of color, set design, and lighting was incredibly radical for the overlit Technicolor at the time. Minnelli for his part displayed the same visual lushness in black-and-white films like The Clock (Judy Garland's first major non-musical role), Father Of The Bride (the original film), his adaptation of Madame Bovary (starring Jennifer Jones and featuring a stunning ball sequence) and The Bad and the Beautiful.

His color films achieved even more impressive results in his lesser-known but highly influential melodramas, most famously Lust for Life his biopic of Vincent van Gogh with Kirk Douglas in the title role, which recreates the look of Van Gogh's paintings in film. The visual design of the Frank Sinatra-starring melodrama Some Came Running is also highly treasured. Minnelli stated that he modeled it on the inside of a jukebox and the finale at the fairground is regarded as legendary by the likes of Martin Scorsese for its use of color, camera movement, and stylization.

After the Fall of the Studio System, Minnelli's career floundered and declined in the '60s and '70s. He retired after the troubled production of A Matter of Time (which he later disowned) and spent his final years working on his autobiography. He died in 1986 but his films are ripe for rediscovery.