Film / Meet Me in St. Louis 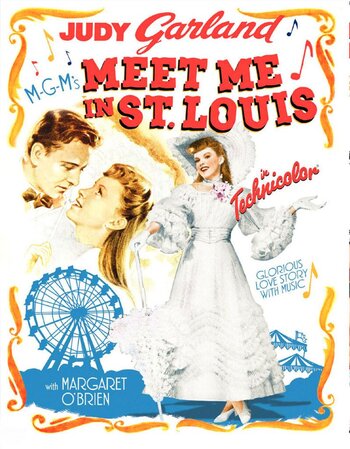 "Just when St. Louis was going to be the center of attention of the entire universe..."
Clang, clang, clang went the trolley
Ding, ding, ding went the bell
Zing, zing, zing went my heartstrings
As we started for Huntington Dell.
— "The Trolley Song"
Advertisement:

A classic 1944 musical film adapted from the stories of Sally Benson, Meet Me in St. Louis was directed by Vincente Minnelli and starred his future wife, Judy Garland, along with Mary Astor, Margaret O’Brien, Leon Ames, Lucille Bremer, Tom Drake, and Marjorie Main.

The film follows a year in the lives of the Smith family, who live in St. Louis at the turn of the 20th century. In particular, it follows the second-eldest daughter, Esther (Garland); her youngest sister, Tootie (O'Brien); and Esther's crush, John Truitt (Drake). Everyone is excited with the coming of the 1904 World's Fair; however, that all changes when Mr. Smith (Ames) announces that the family might be uprooted to New York.

A Screen-to-Stage Adaptation went to Broadway in 1989.

Esther Smith's all tied up

Esther Smith is tightly corseted by her sister Rose, to get a figure ready for the Christmas Ball.

Example of:
Of Corset Hurts

Esther Smith's all tied up

Esther Smith is tightly corseted by her sister Rose, to get a figure ready for the Christmas Ball.