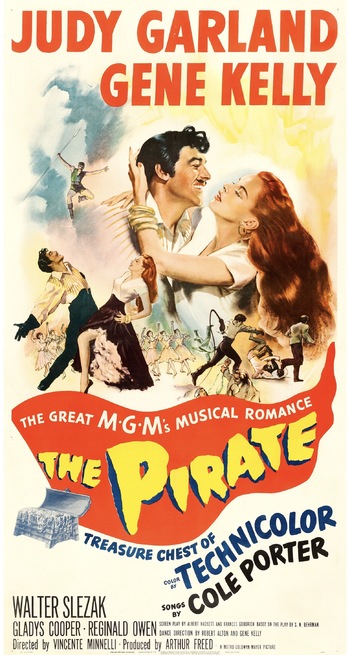 In the small Caribbean village of Calvados, beautiful young Manuela Alva (Garland) dreams of being swept away by the legendary pirate Macoco (aka "Mack the Black"), in spite of her betrothal to the cowardly old mayor Don Pedro (Slezak). Before her wedding day she meets The Great Serafin (Kelly), leader of a troupe of traveling players who falls head over heels in love with her. After learning about Manuela’s infatuation for Macoco, Serafin crashes her wedding pretending be the dashing pirate of her dreams. Romantic twists, lots of singing and dancing, and more than a few surprises — including the identity of the real Macoco — ensue.

While its place in musical history is up for debate, The Pirate boasts some phenomenal songs written by the legendary Cole Porter, most notably "Be a Clown" (which was later plagiarized for another Gene Kelly musical, Singin' in the Rain, in the song "Make 'Em Laugh"). The film was also the second of three musical collaborations between Kelly and Garland, the others being For Me and My Gal and Summer Stock.