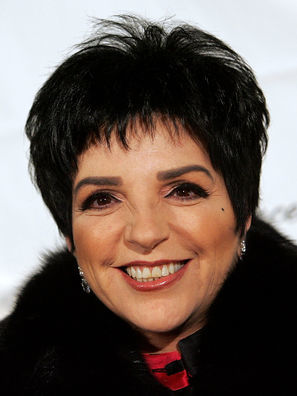 Liza May Minnelli (born March 12, 1946 in Los Angeles, California) is a legendary American singer and actress. The daughter of actress Judy Garland and director Vincente Minnelli, she was exposed to show business at a young age — her first onscreen appearance was at the age of three, alongside her mother, in In The Good Old Summertime.
Advertisement:

She started out a nightclub/pop singer before she starred in films; she broke out in The Sterile Cuckoo as Pookie, for which she was nominated for an Oscar. Her most iconic role is as Sally Bowles in Cabaret, for which she did win the Oscar (along with a bunch of other awards). She also starred in New York, New York alongside Robert De Niro and had a major supporting role on Arrested Development. She's also appeared As Herself in a number of works, like The Muppet Show, Sex and the City 2 and Smash.

She has appeared in a handful of works about The Golden Age of Hollywood. In Judy, a biopic about her mother, she is played by Gemma-Leah Devereux. Kelli Barrett portrays her in Fosse/Verdon, while she is played by Krysta Rodriguez in Halston, which is about her real-life close friend, the eponymous designer.