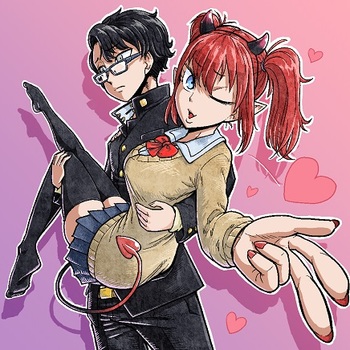 Sometimes a devil lady wants more than just "the D".
Catherine: Maybe I'll skip out on work today...
Vincent: You're slacking... getting kinda lazy aren't you?
Catherine: Oh come on... It's not like there are any men out there hotter than you.
— Catherine, "True Chaos" Ending
Advertisement:

What do you get when you have a being of pure carnal desire navigate romance without sex? You get this trope.

Often, demons such as succubi, incubi and other creatures associated with Lust have a culture of sex. Feeding, mating, and bonding are reliant on the act, so in terms of intimacy this is all that they know. Now, take that same being, and throw them into a situation where romantic love comes into play—suddenly they're thrown out of their element and are left scrambling to understand how sheepish and awkward they've become in relation to their mark.

Oftentimes, this may be the result of the person being immune to the charm effects most succubi possess. In this case, they have to work much harder to get their target and in the process, actually fall in love with them.

If the work is more explicit, it can be a case of Good People Have Good Sex or Bigger Is Better in Bed. Though, with the latter, it might be more in love with the endowment than the person themself. Subtrope of Interspecies Romance.