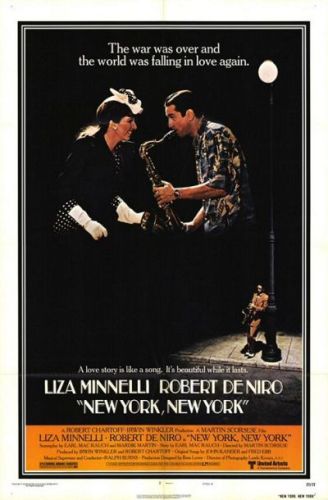 A 1977 film by Martin Scorsese, New York, New York stars Robert De Niro and Liza Minnelli. It is a love story between Jimmy, a saxophonist and Francine, a singer. He tries to pick her up on VJ Day because "The war's over and everyone's falling in love" but she rebuffs his advances, they run into each other, keep running into each other, eventually get together and form part of a band but their relationship slowly withers away as career and artistic dreams introduce tension in their relationship.

This film is known today for several reasons. One, for being a famous flop that to some signaled the point at which the young auteurs of the New Hollywood generation were getting out of control. Two, for being a musical that doesn't play with the usual expectations of the genre since it featured Method Acting, only one big song and dance number (which is filled with Stylistic Suck) and characters who are conventionally unlikable. Three for its famous title song by Kander and Ebb that would be covered by Frank Sinatra and become the unofficial anthem of the city, even if many don't know it's from this movie.

The film suffered from a Troubled Production, which generated poor publicity and it had the misfortune to be released in the same week as Star Wars. It's generally not regarded as one of Scorsese's most notable films though it has become a minor Cult Classic. Scorsese for his part always regarded it as one of his personal favorites.