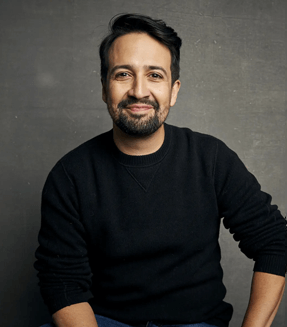 "Mr. Sondheim, look, I made a hat! Where there never was a hat! It's a Latin hat at that!"
Advertisement:

He is best known for creating (and starring in) the Broadway musicals In the Heights and Hamilton (along with its companion album, The Hamilton Mixtape, and successive releases under the umbrella term of The Hamildrops). He's also become a firm part of the Disney family, having written music for Moana and Encanto while also starring as Jack the Lamplighter in Mary Poppins Returns. He's also collaborating with Alan Menken on a live-action adaptation of The Little Mermaid.

He's got a lot of irons in the fire beyond those projects. He's starring as Lee Scoresby in His Dark Materials (a rare non-musical project) and directed the cinematic adaptation of tick, tick... BOOM!.

Oh, and he was instrumental in drumming up popular support to save Brooklyn Nine-Nine from cancellation and was cast as one of Amy's brothers as thanksnote He played the Disco Strangler during a table read, despite not appearing in that episode, because he loves the show so much.

So far he's won a Pulitzer, two Emmys, three Grammys, and three Tonys, as well as a MacArthur "Genius Grant."

All he needs is an Oscar, and he'll be only the third person ever to become a PEGOT, after Richard Rodgers and Marvin Hamlisch.