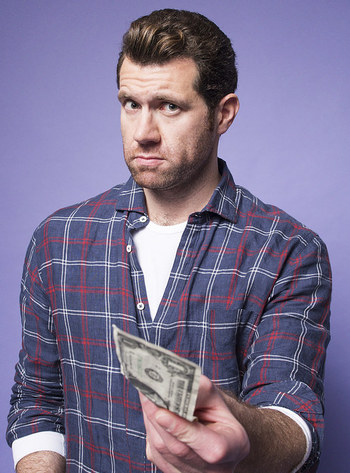 For a dollar...
Advertisement:

Eichner perhaps best known for hosting the satirical game show Billy on the Street, where he accosts strangers on the streets of New York City to participate in games for low sums of money and undesirable prizes, for which he received a Daytime Emmy Award nomination for Outstanding Game Show Host in 2013.

He's also notable for his role as Craig Middlebrooks on NBC's Parks and Recreation and Billy Epstein on Hulu's Difficult People, as well as appearing in the films The Angry Birds Movie and Neighbors 2: Sorority Rising.