Series / Billy on the Street 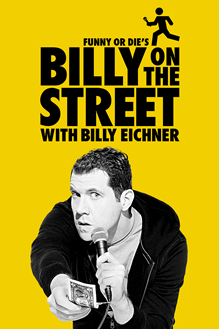 Billy on the Street is a satirical game show starring Billy Eichner, who also created and executive produced the show.

Every episode sees Billy running down the streets of Manhattan and stopping random passersby to ask them questions. These questions often pertain to celebrities or pop culture, but rely entirely on Billy's subjective opinion. Billy also picks random people, as well as celebrity guests, to partake in rapid-fire quizzes such as "Old or Gay?" The celebrity guests also sometimes join him in asking people questions, which often poke fun at them or their career.

The series premiered on the Fuse channel on December 18, 2011, before it hopped to Tru TV in 2015 for the fourth and fifth season. It continued as an online segment on the Funny or Die YouTube channel. The second to fifth seasons are also available on Netflix.

For a dollar, name any trope: