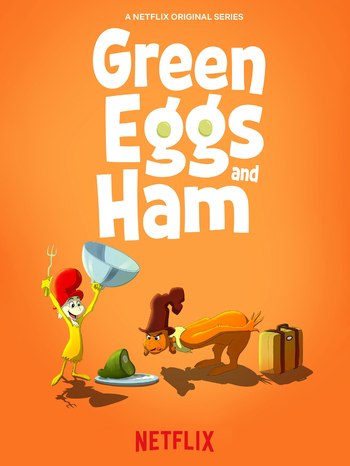 Sam-I-Am: You don't like green eggs and ham?
Guy-Am-I: No, I do not like them, Sam-I-Am! I do not like green eggs and ham.
Sam-I-Am: Understood. Question asked and answered. No further queries necessary. [clicks tongue thoughtfully] Have you ever tried them before?
Guy-Am-I: No.
Sam-I-Am: Weeeelllll, how can you be so sure you don't like 'em if you've never actually eaten them?
Guy-Am-I: Well, I've never eaten walvark droppings, but I'm pretty certain I wouldn't enjoy those either.
Advertisement:

Green Eggs and Ham is an animated series for Netflix loosely based on the Dr. Seuss book of the same name. It was created by Jared Stern for Warner Bros. Animation and produced by Ellen DeGeneres. It is the third TV series based on Dr. Seuss's work and the first to be based solely on a particular book.note The Wubbulous World of Dr. Seuss adapted characters and settings from his entire body of work for new stories, while The Cat in the Hat Knows a Lot About That! stars the characters from The Cat in the Hat, but isn't an adaptation of the book itself.

The series follows friendly, optimistic Sam-I-Am (voiced by Adam Devine) and dour failed inventor Guy-Am-I (a.k.a. the unnamed second character from the book, voiced by Michael Douglas) as they journey to the city of Meepville to return a rare Chickeraffe to its natural habitat before it's sold to wealthy animal collector Snerz (voiced by Eddie Izzard). Along the way, they're occasionally joined by their distaff counterparts, safety-obsessed Michellee (voiced by Diane Keaton) and her adventurous daughter E.B. (voiced by Ilana Glazer), and followed by two dangerous-looking characters called The B.A.D.G.U.Y.S., veteran animal hunter McWinkle and his rookie sidekick Gluntz (voiced by Jeffrey Wright and Jillian Bell, respectively), attempting to capture the animal themselves.

Their adventure takes them to many different places, including in a car, on a train, on a boat, in the rain, with a fox, in a box, in a house, with a mouse... all the while, Sam is trying to get Guy to try new things, including his Trademark Favorite Food.

The first season at 13 episodes premiered November 8, 2019. A ten-episode second season, with the subtitle The Second Serving, premiered April 8, 2022. The Second Serving takes the form of a spy thriller amidst the backdrop of The Butter Battle Book.

Turns out they're not as bad as you think.

Example of:
Fun with Acronyms

Turns out they're not as bad as you think.