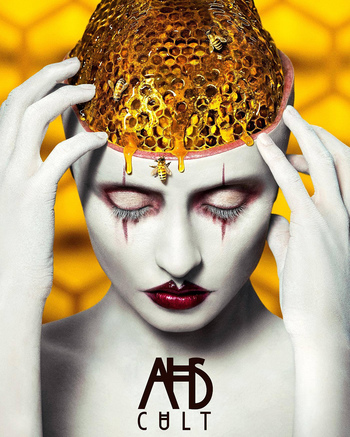 After Donald Trump is elected President of the United States, Ally Mayfair-Richards (Sarah Paulson) is deeply distraught. The result has especially triggered her coulrophobia (fear of clowns) despite the emotional support of her wife, Ivy (Alison Pill), and her therapist, Dr. Rudy Vincent (Cheyenne Jackson).

Elsewhere, blue-haired anarchist Kai Anderson (Evan Peters) revels in Trump's victory, and enlists the likes of his child-hating sister Winter (Billie Lourd) to spread their shared nihilism through a clown-based cult. Their first target? Ally and Ivy's young son, whom Winter is hired to babysit.

Through exploiting Ally's fear of clowns through circus imagery and Twisty the Clown memorabilia, the Mayfair-Richards family find their sanity — and safety — compromised.

See the main titles sequence for this season here