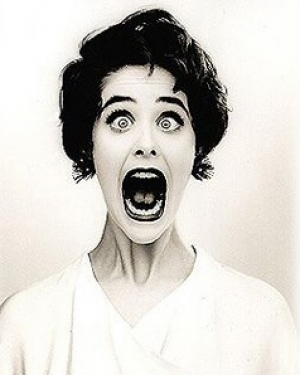 "I have heard that hysterical women say
They are sick of the palette and fiddle-bow,
Of poets that are always gay."
— William Butler Yeats, "Lapis Lazuli"
Advertisement:

This trope characterizes women as less rational, disciplined, and emotionally stable than men, and thus more prone to mood swings, irrational overreactions, and mental illness.note The ancient Greeks believed that a woman's uterus would move out of place and attack other organs, causing all sorts of maladies, both mental and physical. The trope name comes from the Greek word hysteros, womb or uterus. Which, incidentally, is why the removal of the womb is called a "hysterectomy." As a result, female characters may be coddled, their opinions undervalued, or portrayed as incapable of holding power.

Not to worry. Such hysteria is easily cured with a good slap on the face.

A blatant Double Standard, it was used and invoked quite freely in older works. These days it is rarely invoked, as most people are aware of the obvious Unfortunate Implications. Despite that it's still more common to portray female characters becoming emotionally overwrought when under stress or behaving more irrationally than men, even when it would be out-of-character. Male characters like this are likely to be unsympathetic or comedic. An insensitive male character may ask, "Are you on your period?" or something on those lines.

This trope is also why lead characters in horror movies tend to be female, although given the nature of the genre, many such characters are portrayed more sympathetically, being Properly Paranoid while the men who denigrate them for being emotional are portrayed as either Too Dumb to Live, obstructively condescending, or outright antagonistic. She's called the Final Girl for a reason, after all.

Can also be invoked by female characters as a defense mechanism against criticism, when they recognize they are being irrational or sense the mounting frustration of other characters. For example "Sorry, I must be PMSing, that was unnecessarily rude". This is generally a sign of insecurity and perhaps repressed trauma. This is the way you'll more often see the trope used in the modern day. While she doesn't really expect the other characters to believe in her excuse: it is still a socially acceptable one.

Compare The Ophelia which is about genuine insanity; Unstable Powered Woman where emotions and other female hysteria result in a powerful, but incompetent and unstable woman. Often prone to Inelegant Blubbering. May involve Get a Hold of Yourself, Woman! to correct. Compare Screaming Woman and All Periods Are PMS (for when the character's reaction is dismissed as hormones acting up). For situations when those hormones were thought to have supernatural implications, see Menstrual Menace. See also All Women Are Lustful, for when her "irrationality" was thought to make her morally weaker. Also see Hypochondria, for when her "irrationality" was thought to make her believe she's sick when she's not, or make up a sickness for attention. Contrast Women Are Wiser (where women are depicted as more rational and emotionally stable than men) and Emotionless Girl.

This trope is a type of Strawman Emotional.