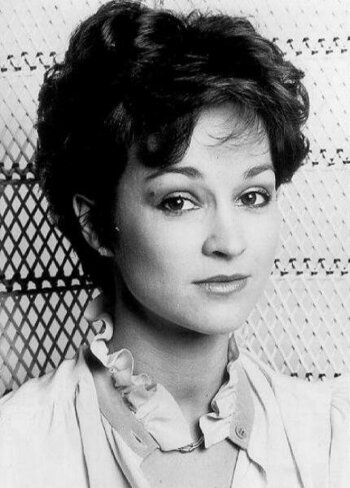 Janet Fielding (born 9 September 1953) is an Australian actress. Based in the UK for most of her career, she is best known for playing Doctor Who companion Tegan Jovanka from 1981 to 1984. She joined the show in "Logopolis", the final serial to feature Tom Baker's Fourth Doctor, and remained on the show for almost the entirety of Peter Davison's run as the Fifth Doctor, departing two stories before Davison in "Resurrection Of The Daleks".
Advertisement:

Since leaving Doctor Who, she has often been critical of the show during her time on it, frequently complaining about the way she and her fellow companions were treated. This reached its highpoint with a notorious on-stage outburst at Panopticon 1993 when she told a room full of fans that any show that treated its female characters as badly as Doctor Who did deserved to have been cancelled.

She has also blamed Doctor Who for killing her acting career; having achieved limited success in the years since leaving the show, in 1991 she gave up acting to become a theatrical agent. Her clients included Paul McGann, who was cast as the Eighth Doctor while represented by her.

For a long time, she declined to reprise her role as Tegan for Big Finish audio plays, but she agreed to make a one-off appearance in "The Gathering" (2006), and eventually returned on a regular basis starting with "Cobwebs" (2010).

Works with pages on TV Tropes that she has appeared in: