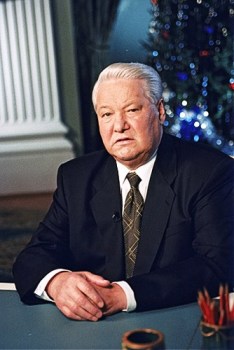 The man in one of his sober moments (we think).
"Let's not talk about Communism. Communism was just an idea, just pie in the sky."
— Comment during a visit to the United States, as quoted in The Independent (12 September 1989)
Advertisement:

Boris Nikolayevich Yeltsin (Russian: Бори́с Никола́евич Е́льцин, 1 February 1931 – 23 April 2007) was the first President of what we call The New Russia. And one hell of a drunk man, but we'll get to that part later.

Originally a supporter of Mikhail Gorbachev, he became then one of Gorbachev's most powerful political opponents during and after the Perestroika. He was elected to the newly created post of President of the Russian Soviet Federative Socialist Republic (SFSR), which was one of the constituent republics of the Soviet Union. After the resignation of Gorbachev and the dissolution of the Soviet Union, he kept his job as President, now of the Russian Federation.

The man himself vowed to transform Russia's socialist economy into a free market economy, implementing, in order to achieve that, price liberalization, various privatization programs and shock therapy

He reportedly became disillusioned with communism after a 1989 visit to a supermarket in Houston, Texas

Problem is, this sudden privatization caused a good portion of the Russian wealth to fall into the hands of a small group of oligarchs. As a result of all this, widespread corruption, inflation, economic collapse, and several political and social problems ensued.

In 1993, he dissolved the parliament in order to solve his confrontations with the Supreme Soviet, which then tried to remove him from office. The army sided with Yeltsin, and shelled the Russian White House, causing the death of 187 people. He then scrapped the constitution and introduced one from scratch, with stronger presidential power, which was approved by a referendum.note 54,8% of all voters participated in the referendum and 58% of them supported the new constitution. I.e. only a quarter of Russian people actually voted for the constitution. At the same time, he temporarily banned political opposition and deepened his economic experimentation (which, in hindsight, became almost an economic suicide).

A year later, he ordered the invasion of Chechnya in order to restore Moscow's control over that republic. This, in addition to his economical 'achievements' mentioned above, led to his rating falling to 5% by March 1996. In order to win the elections that year, a peace agreement was signed, leaving behind a devastated Chechnya still under separatist control. Yeltsin did manage to win, thanks to non-stop propaganda by government- (and Yeltsin-friendly oligarchs-) controlled media raising his rating from 5% to 60% in six months.

During his second term (which started with a quintuple heart bypass surgery), Russia received the equivalent to 40 billion US dollars from the IMF, which were later allegedly stolen by some people of Yeltsin's circle and placed in foreign banks. However, in 1998, his government defaulted, the ruble collapsed. A year later, he survived another attempt of impeachment, and fired his prime minister Sergei Stepashin, and appointed to the job a man who would become very, very, very popular.

All these crises, along with lack of international support (and US opposition) regarding Chechnya, caused him to do a surprise resignation in the last day of the last month of 1999. It's widely known who came next.

Besides all these things, he also became known for his notorious alcoholism, which he struggled with ever since his days as a party boss in Sverdlovsk/Yekaterinburg, and which seemed to get worse and worse for all of his presidential career.note (There were even some theories

about how he actually drank himself to death in 1999 and the Yeltsin that lived until 2006 was a Body Double.) Among other incidents, at one point, while visiting Clinton in DC, Yeltsin turned up in his underwear on Pennsylvania Avenue, trying to hail cabs. He often appeared drunk in public. He also had strange behaviours, due to the fact that Kremlin doctors gave him "strong drugs" which were incompatible even with a little drop of alcohol. Ironically, after his resignation, he finally managed to become sober and solved his alcoholism problems.

After said resignation, he made almost no public appearances, except for some criticism (made alongside Gorbachev) regarding Putin's initiative to replace the election of regional governors with a system whereby they would be directly appointed by the president and approved by regional legislatures.

Yeltsin died of congestive heart failure on 23 April 2007, at the age of 76. He was the first Russian head of state to be buried in a church ceremony in more than a century, 113 years after Emperor Alexander III.