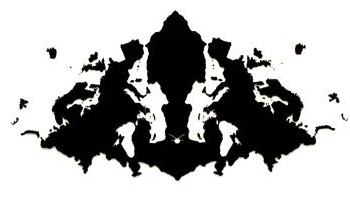 What do you see? And no, Rorschach is not the answer.
"He said pepul see things in the ink. I said show me where. He said think. I told him I think a inkblot but that wasnt rite eather. He said what does it remind you—pretend something. I closd my eyes for a long time to pretend. I told him I pretned a fowntan pen with ink leeking all over a table cloth."
— Charlie Gordon, Flowers for Algernon (sic)
Advertisement:

The inkblot test, commonly known as the "Rorschach test" after its most famous iteration, is a psychiatric tool where a patient looks at a blot of ink and says what he sees. This will supposedly reveal the workings of the patient's subconscious and show the audience what they're really thinking. Almost all inkblot tests will be symmetrical, meant to imitate (if not actually be) a puddle of ink on a folded sheet of paper, replicating the pattern on each side.

On TV, it matters very much what specifically the patient sees in the inkblot. If he sees a butterfly, he's innocent; if he sees a corpse, he's guilty. If he's obsessed with something or someone, that's what he sees. If he sees something naughty, it proves Freud Was Right. In some comedic situations, the inkblot will be created spontaneously, with a sheet of folder paper and whatever ink or ink-like substance may be handy; the results are no different. In very comedic situations, the inkblot will spontaneously form a perfectly clear image of whatever the patient is meant to see.

In Real Life, the Rorschach test is considered kind of outdated and limited in value. Unlike on TV, psychiatrists who administer the test aren't looking for what the patient sees so much as how they see it — how long did it take them to come up with something, how novel or common is their interpretation, how much does the inkblot actually resemble it, are they focusing on the colour or the shape of the inkblot, is the patient deliberately being obtuse — things like that. Psychiatrists also rely on something called the "Exner scoring system" so that they don't have to use their personal judgment to interpret the results, unlike what you'd see on TV. And even with all of this, the Rorschach test is only about 66% accurate, which further explains why it's kind of disfavoured.

Incidentally, most inkblots seen on TV are not "real" Rorschach tests. The easy way to tell is that on TV, almost all inkblots are black on white paper, whereas actual Rorschach blots can be multicoloured. But more interestingly, there are only ten "real" Rorschach inkblots which are not spontaneously created like on TV. The American Psychiatric Association actually tries to keep them a secret, so that people can be shown the blots without having seen them before on TV and thus come up with a more spontaneous response. But they're easily found on the Internet if you're curious.

From the results of the inkblot test, Dr. Scratchansniff concludes that Yakko is obsessed with girls.

From the results of the inkblot test, Dr. Scratchansniff concludes that Yakko is obsessed with girls.