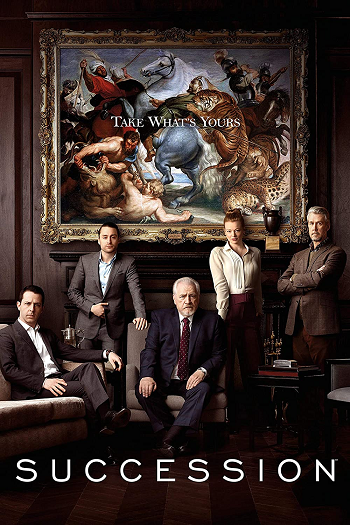 A 2018 satirical comedy-drama of the Eat the Rich persuasion, airing on HBO and created by writer Jesse Armstrong of Peep Show fame. The show focuses on media baron Logan Roy (Brian Cox) and his family's struggle to divide his massive conglomerate, Waystar-Royco, among themselves.

Further complicating the Succession Crisis is the fact that the Roy family's massive wealth has made them all self-absorbed and divorced from reality, which inevitably poisons their relationships with each other and the world around them. Growing up spoiled and wanting for nothing has left each of the Roy children lacking any real work ethic. Logan's efforts to raise them to be just as ruthless as he is has also massively backfired, as they have just ended up with zero loyalty and a willingness to stab anyone in the back, including their own father.

The show's third season finished in December 2021; it has been renewed for a fourth.

Not to be confused with the novels in The Succession Duology, sometimes marketed as Succession.