Batman in My Basement 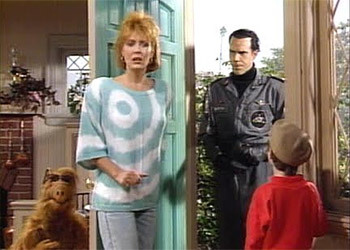 An alien? No sir, we are not hiding any furry aliens. Alf! Stop laughing!
Advertisement:

Some character — a Rebellious Princess, an alien, The Chosen One or the Mad Scientist's Beautiful Daughternote Or Batman — is on the run, homeless, out of options, and needs a place to hide. It becomes the duty of the first available Ordinary High-School Student they come across to stash the hero in their basement/garage/attic/bedroom until they Save The World/defeat the Big Bad/find a portal back to their Magical Land.

The rescuer, whether enthusiastic or reluctant, quickly runs into a big problem. Because they are not a victim of Parental Abandonment, they have to keep up a charade of hiding the character from said parents. Family members start to notice that the character's spending a lot of time in their room, acting rather snippy about people going in there, stashing food, and apparently talking to themselves. They will make some quick excuses about practicing lines for a school play.

Meanwhile, the hidden character isn't much help, being prone to doing strange things having to do with their origin, or falling in love with their protector's sibling or friend, or being pursued by one of their own, or being incapacitated.

When the character is eventually found, a quick Secret Identity, Unpronounceable Alias, or Line-of-Sight Alias will be conjured on the spot, along with an unusual job title to explain their strange outfit. If female, the hidden character will frequently end up as a maid.

As you would expect it is also a popular concept in fanfictions. Mostly in the form of the author him or herself finding his/her favorite and beloved character entering the real world from their media of origin (book, tv, comic, etc.) and befriending them.

The Trope Namer is the Batman: The Animated Series episode "I've Got Batman In My Basement", which revolved around a group of local children hiding Batman from the Penguin as he recuperated from a heavy dose of poison. The production team does not think too highly of the episode, citing their distaste for excessively kid-friendly plots as well as the bumbling antics of the villains.

Subtrope of Sent Into Hiding. May overlap with Supporting the Monster Loved One.