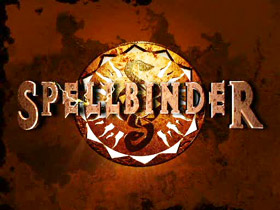 Australian-Polish sci-fi TV drama for older children (quite possibly the only show in existence to qualify for that exact description) note well, okay, Mission Top Secret had an episode or two shot in Poland by the same Australian crew and directors, but it was for younger audience..

The series deals with parallel worlds, with a group of modern-day Australians accidentally crossing over. The sequel, Spellbinder: Land of the Dragon Lord, was an Australian-Polish-Chinese collaboration which featured a new cast and several new parallel worlds, but kept the villain from the previous series.

Australian teenager Paul Reynolds, while trying to pull off a prank on a school camping trick, falls through a rift caused by electrical signals in 'our' Australia coinciding with those happening in the same place but in an Another Dimension. When he finds himself in a primitive feudal world, he initially assumes he's been a victim of Time Travel to medieval Europe, but then it turns out that the feudal overlords, known as Spellbinders, have flying ships and electrical 'magic'...

An interesting aspect is that all the Polish actors were used to represent people in the Spellbinders' world, meaning the difference in accent strongly identified people from one world rather than the other.

The first season covered Paul trying to get home while his friends back in Australia learned the truth and tried to convince his scientist father. While the latter plot arc was fairly formulaic (Adults Are Useless) the former was notable for its twists and turns in which one was never quite certain for a long time which of the Spellbinders Paul encountered was 'on his side' or out for their own gains.

Paul returned at the end of the first season, but brought Rianna, a peasant girl from the other world who had helped him, with him and she soon became lost in modern Sydney in a Fish out of Water scenario. Meanwhile, the antagonist Spellbinder Ashka was able to follow them...

The sequel series Spellbinder 2 featured a new cast and several new parallel worlds, in which only Ashka and her Dragon Gryvon reprised their roles.

The Morgan family Carl and Vicky with their children Kathy and Josh are on a camping trip when Kathy accidentally stows away in travelling scientist Mek's trans-dimensional "boat". Kathy's random dialing takes them to the Spellbinders' world, from which they escape with Ashka from a labour camp (where she was put after Series 1) back to Mek's world and home country: the China-styled Land of the Dragon Lord, ruled over by Sun, eponymous Dragon Lord and spoilt boy, supported by the Oracle, a computer-like device which among other things keeps the empire and its borders safe. From there on it deals with the families attempts to find each other and get home safe, Ashka's plots, a barbarian invasion, and stints in several other worlds while everyone tries to outwit and evade each other while fighting for control of the boat, the empire, and the Oracle.

Reccuring tropes in both series: