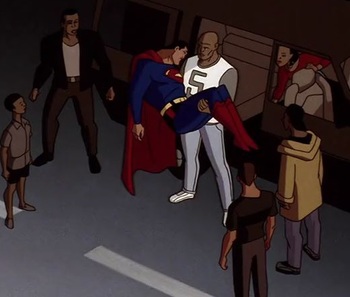 Well, he's weaker now — until he gets his armor on.
Advertisement:

The hero or main character is physically wounded or suffers from a Power-Strain Blackout or Heroic BSoD such that they require assistance from a much weaker or less capable character (often a woman, Red Shirt, kid, or sometimes a combination thereof).

There is no safe way for the hero to get out of this situation by themself. Either the wounds would leave the hero vulnerable to discovery/attack/losing to the villain or at the extreme the hero would die without assistance. This is never a case of toughing it out. In fact, if the hero is still able to plan and direct their assistant significantly, they don't qualify for this trope. The injury (whether physical, mental, or otherwise) should be severe enough that the hero is out of the game with the possible exception of cooperating with the assistant in their attempts to help.

This can be done for a number of reasons. Making the hero more vulnerable makes them more accessible to the viewer. It can also be used to show that the person assisting is in fact more capable (at least slightly) than they've been allowed to show previously. It is usually an occasion for the relationship between the hero and the rescuer to become closer. If appropriate to gender preferences of the participating characters, this will often lead to a Rescue Romance (or advance a nascent romance quickly). If a Mook is assisting, this can lead to a Mook–Face Turn. It can also be used as a way to slow down the plot and/or let the villain catch up (putting the hero's plans on hold until they're rescued/fully recovered).

A Sub-Trope of Badass in Distress, where the help always comes from a less powerful character and they can't recover on their own note as most of the examples on that page show one of those scenarios. This version, however, does not generally lead immediately into an action sequence.

Compare: Heroic BSoD, where time or a stiff talking to is usually is all that's needed to recover. Heroic RRoD, which is sometimes fatal (Wounded Hero isn't) and can be recovered from on their own. The After Action Patch Up is similar as it's a quiet moment of healing between the hero and assistant, except Wounded Hero is absolutely needed and not just minor or cosmetic. Compare also: Distressed Dude, Hurting Hero.

The Single-Episode Handicap has similarities, but that is escaped by the hero relying on other abilities. Here, they don't have that option. The hero must have someone else's help or die (or at least run a heavy risk of making things worse).

The trope is also very similar to Now, Let Me Carry You. However, that is more of a variant of positive Laser-Guided Karma. In this one, the helper need not be previously helped by the hero.