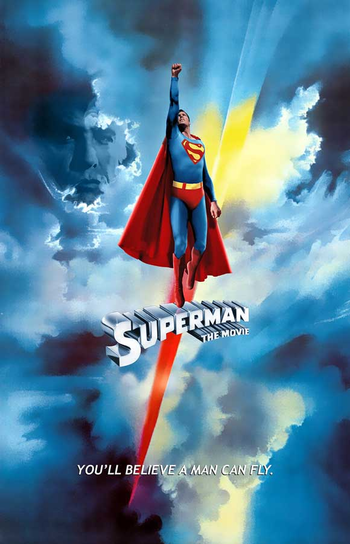 And we did. We sure did.
"His name is Kal-El; he will call himself Clark Kent, but the world will know him as Superman."
— Trailer

The success of Superman in the comics opened the doors for other masked marvels in colorful costumes — and 1978's Superman: The Movie (or just Superman, the onscreen title) did the same for big-budget superhero films. While it wasn't Superman's first live-action foray — it followed movie serials in 1948 and 1950, and a pilot movie in 1951 for a television series which ran from 1952 to 1958 — it went above and beyond them in terms of spectacle and special effects like never before seen on screen.note As with the Batman comics, Zorro asserts his influence here as well: the producers, Alexander and Ilya Salkind, admitted they decided to make a Superman film after seeing a billboard of Alain Delon as the eponymous character of 1975's Zorro.

Produced (concurrently with its first sequel) in the late 1970s and released in 1978, Superman almost wasn't even made, since Warner Bros. feared it would be two hours of campiness à la the 1960s Batman TV series (which had already gotten its own movie-length feature). This was averted when the producers secured the commitment of Oscar-winners Marlon Brando and Gene Hackman to appear in it and a screenplay written by Mario Puzo (The Godfather) was approved, after which Richard Donner was hired to direct and history was made. Part of Donner's mission became a production motto of "Verisimilitude," an attempt to make the world feel natural while including the Super Hero into that setting. They also pushed the boundaries of visual effects to make Superman's flying and other superpowers look as convincing as they could.

Superman had a star-studded cast, with the likes of Brando, Hackman, Ned Beatty, former child star Jackie Cooper as Perry White, and Glenn Ford as Jonathan Kent — except for the two main characters. Casting the titular hero was a real hunt, but the studio hit the jackpot with Christopher Reeve, who is likely the best actor ever to play the role. (Watch the scene where he transitions between the character's identities on camera in Lois' apartment if you need convincing.

) Finally, composer John Williams supplied a grand score that gave a powerfully majestic heroic tone to the story, even while it didn't take itself too seriously.

Superman established a standard superhero film format dealing with his or her origin story: Origin of Hero, then Introduction of Arch-Enemy, Love Interest and other important characters (which often didn't happen all at once in the comics), then First Conflict. The film starts on Krypton, with brilliant scientist Jor-El (Marlon Brando) sentencing a trio of treasonous villains to spend eternity in The Phantom Zone. Following this scene, the film follows Superman's origins — Krypton's explosion, baby Kal-El's trip through space, getting his adoptive name of Clark Kent, and the first appearance of Superman — before he becomes a mild-mannered reporter for the Daily Planet as Clark, rescues Lois Lane (Margot Kidder) and others as Superman, and finally has to stop a plot by the self-proclaimed "greatest criminal mind of our time", Lex Luthor (Gene Hackman), to destroy the West Coast.

The film was followed by 1980's Superman II, 1983's Superman III, and 1987's Superman IV: The Quest for Peace, as well as the related (and unsuccessful) 1984 spinoff Supergirl. The producers went on to create The Adventures of Superboy a few years later.

Writers and directors such as Tim Burton, Kevin Smith and J. J. Abrams attempted to reboot the franchise with their own unique takes, but despite coming close in a few occasions (famously "Superman Lives," which was mere weeks away from filming) they didn't take hold. Superman Returns in 2006 ended up both a sequel and a Spiritual Successor to the first two films, was released, directed by Bryan Singer of the X-Men Film Series, with Brandon Routh as Superman.

In the aftermath of Returns, Christopher Nolan produced and Zack Snyder directed 2013's Man of Steel, a Continuity Reboot which starred Henry Cavill as the title character. The film became the first of the DC Extended Universe, a Shared Universe of DC Comics characters where Superman, Batman, Wonder Woman and others share the big screen for the first time.

DC started publishing a Superman '78 series in 2021, featuring the continuing adventures of the movie versions of the characters.

Useless trivia: this film directly inspired the second run of Mister Rogers' Neighborhood through children trying a little too hard to imitate the Man of Steel, sometimes at the cost of their lives; Fred Rogers, who initially ceased production of the show out of a belief that he had run out of topics to cover and was ready to move on to other projects, felt that the Superman imitation incidents demonstrated that there were still more lessons to be taught. In fact, an early week of the second run dealt with the topic of imitable behavior as it relates to films like this one.

The first film in this series contains examples of: