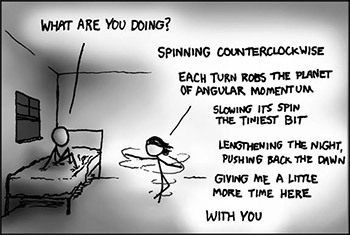 "SUPER-CHRIS flies off into SPACE and, as much as it's still impossible to believe that this was a thing that actually happened in an actual major motion picture, he FLIES AROUND THE EARTH so fast that THE EARTH STARTS SPINNING BACKWARDS, which somehow, SOMEHOW, causes TIME TO REVERSE ITSELF."
— The Editing Room's abridged script for Superman: The Movie
Advertisement:

The nefarious Dr. Dino, a fearsome T. Rexpy that spent eras trapped in ice hundreds of miles beneath ground level and gained massive scientific intelligence through exposure to radiation from the planet's core, is hard at work with his evil scheme in his secret lab at the center of the Earth. He knows his people are long extinct, but he plans to undo that: he's installing a heat-powered, super-strong revolution motor in the center of the planet. When he finally switches it on, it will force the Earth's rotation to stop and reverse direction, thereby rewinding time to the Cretaceous period where the dinosaurs reigned supreme! Mwahahaha...

It doesn't take a physics major (although it doesn't hurt to be one) to realize that Dr. Dino's scheme has no reason whatsoever to work as planned, even if his planetary rotation motor thingamajig does. We just so happen to measure time by the rotations and revolutions of the Earth; modifying the latter would almost certainly do absolutely nothing to alter the former (excluding the principle of relativity, of course, but that works very differently). Expecting it to do so is akin to pouring more mercury into a thermometer and expecting the room to get warmer as a direct result.

And yet, this appears to be a fairly common misconception across many different works. How many times in fiction has someone slowed down, sped up, or (most commonly) rewound time simply by altering the Earth's rotation accordingly, as if the planet were attached by the poles to the Master Clock of the Universe?