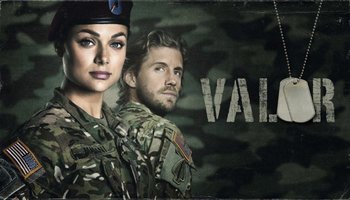 Valor is a CW drama series created by Anna Fricke and Kyle Jarrow, serving as showrunners. It stars Matt Barr and Christina Ochoa in the lead roles of the show. The first episode aired on October 9, 2017.

The show takes place in Somalia where 186th Special Operations Aviation Regiment "Shadow Raiders" choppers are deployed to back Delta Force during a black op to secure an important target. Before the 186th SOAR could withdraw, they found themselves under attack from armed Somali militiamen that they sustained heavy losses. The only survivors who were able to escape the ambush are Captain Leland Gallo and Chief Warrant Officer 3 Nora Madani, who were awarded the Distinguished Flying Cross with "V" device for their actions in Somali territory...

Except that the two pilots found out that the target they extracted was someone who was supposedly declared dead publicly. Sergeant Shane Dylan Hendrix of Delta Force and Staff Sergeant Jimmy Kam of "Shadow Raiders" was declared AWOL until the latter's family found out that they were held as prisoners. They stumble onto a conspiracy that concerns their Somali op and officials trying to determine if Gallo and Madani are hiding any other details from their superiors...

Due to declining ratings halfway through the show, The CW announced that the show will not have another season, leaving some of the events in the last episode in a cliffhanger.