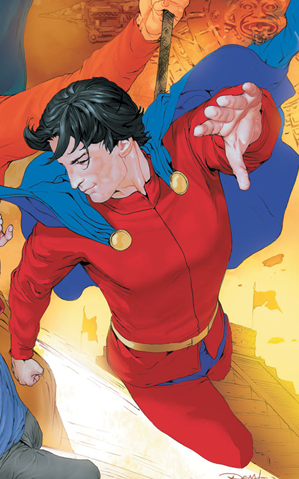 "Yeah, see, I'm still getting used to Earth's ways and customs and rules and all, so forgive me, but… for it to be treason, don't I have to be an American? Or at the very least from Earth."
— Lar Gand, Superman Vol 1 696
Advertisement:

Lar Gand, also known as Mon-El, M'Onel, Valor and Nomad, is a DC Comics character created by Robert Bernstein and George Papp, he first appeared in the pages of Superboy in 1961. While his past is subject to change and inevitably tied to Superman's he is consistently a hero from the planet Daxam, whose people are distantly related to Kryptonians and have a similar powerset, but a much easier to come by and more irreversibly fatal Kryptonite Factor; lead.

Lar is a longtime Superman ally and has served on many teams, most prominently the Legion of Super-Heroes but also the legion's "modern" equivalent L.E.G.I.O.N., the Green Lantern Corps and the Justice League of America. When he first arrived on earth he was suffering from amnesia so Superboy dubbed him Mon-El and treated him as an older brother. He freed many people from the Dominator's experiments and helped them colonize the planets that would later become the home worlds of several of his future Legion teammates including Cosmic Boy. During this period Lar-Gand was exposed to lead and Clark interred him in the nightmarish Phantom Zone to keep him from dying of it while a cure was found. Said cure was developed by Brainiac 5 of the Legion of Super-Heroes a thousand years later.

In 1992 Lar received his own ongoing title Valor which ran for twenty-three issues.

For differences between iterations of him see Legion of Super-Heroes: Silver Age, for highlights on his relationship to the rest of the Superman family see Superman – Supporting Cast.

I'm a living time paradox, you see. History—not to mention my own memory—says I'm a crucial player in the development of humanity. I freed the enslaved humanoids that colonized the inhabitable worlds of the galaxy. Without me, the united planets—and the Legion of Super-Heroes—wouldn't exist. But that's thirtieth century history. In the past—now—the twentieth century—I died. Before I did any of that stuff. And history started unravelling. So my future self—me, that is—has been patched into the timestream by the linear men to make sure everything happens the way it should. Don't ask me how—it makes my head hurt just to think about it.
—Lar Gand, Valor 20