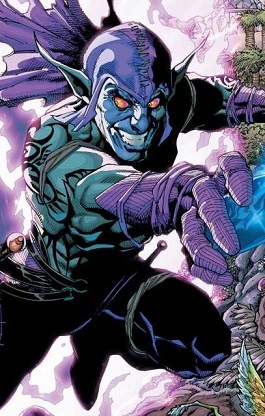 Eclipso is a DC Comics supervillain. The character first appeared in House of Secrets #61 in 1963. While trying to view a solar eclipse, Dr. Bruce Gordon was wounded by a mysterious black diamond after fighting off a native sorcerer. He kept the gem, but during the eclipse, his personality became twisted. The villainous Eclipso emerged and wanted to wreak havoc on mankind. Complicating matters was that he saw the first obstacle to his rise for power as Bruce Gordon himself, making plans to kill his alter-ego. Following his initial appearance, Eclipso made several appearances in the DC universe at large.

In the early 1990s, DC revamped Eclipso in a company-wide crossover. Eclipso was not simply Bruce Gordon's dark half, but a vengeful demon who had possessed Gordon. Eclipso's soul had originally been bound inside a giant black diamond called the "Heart of Darkness" in Africa. A treasure hunter found it in the late nineteenth century and brought it to London in 1891, where he had a jeweler cut it into one thousand shards. This weakened the binding spell, allowing Eclipso to possess anyone who became angry while in contact with one of the shards. He was no longer limited to possessing Gordon during an eclipse, but pretended otherwise so that Gordon would not know the truth about the black diamonds.

After several storylines of the new status quo, Eclipso obtained several new hosts, including Alexander Montez, Superman, and Jean Loring, but eventually returned to possessing Bruce Gordon again. The New 52 connected him to Amethyst, Princess of Gemworld, who defeated him once more. In DC Rebirth he possessed Maxwell Lord and was able to control the Justice League with expanded powers, but was defeated and imprisoned in the diamond by the end of the storyline.