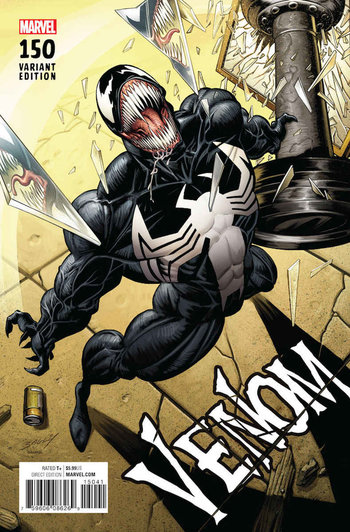 WE ARE VENOM!!!!
"We'll call ourself... Venom! Feels right! I was unsure before, but now I understand. With great power comes great responsibility! Ah, and one other thing: REVENGE! Heh!"
— Venom, Web of Spider-Man Annual #8
Advertisement:

Venom is a Marvel Comics character, and one of the most famous of Spider-Man's Rogues Gallery, though over time his character and motivation have evolved. To date there have been numerous men and women who have assumed the mantle of Venom.

Venom's origin began with an alien symbiote that was used to build a new suit for Spider-Man, inspired design-wise by the second Spider-Woman (Julia Carpenter) during their team-up in Secret Wars (1984). The costume change was initially unpopular with fans (although the black costume would later become one of Spider-Man's most popular costumes) so it quickly went through a Retcon and was revealed to be an alien symbiote that wanted to bond with Peter Parker. Horrified, Spidey managed to repel the symbiote by taking advantage of its weakness to sonic noises via church bells. Some writers and editors did not like Peter's motivation at the time so there was a second Retcon that the suit was more powerful than his ordinary suit, but was slowly corrupting him with rage, making him more aggressive and violent.

The creature ultimately survived, going on to bond to a series of hosts (many that bore grudges against Spider-Man), developing from a lonely alien creature to an '90s Anti-Hero to bloodthirsty monstrosity, and then back to an anti-hero after being cleansed. Its popularity among creators and fans has made it among the most memorable of Spider-Man's Rogues Gallery and of Marvel's anti-heroes. Its first villainous host, Eddie Brock, became a popular anti-hero in the 1990's and received a series of solo runs starting with Venom: Lethal Protector. Its third host, Mac Gargan, was the longtime Spider-Man villain known as the Scorpion; and was its host from 2003 to 2010 as a member of Norman Osborn's Thunderbolts and the Dark Avengers, where he impersonated Spider-Man and even got his own solo comic, Dark Reign: Sinister Spider-Man. Its fourth host was long-time Spider-Man supporting character Flash Thompson, who starred in Venom Volume 2, the Secret Avengers, and Thunderbolts Volume 2. After Venom Vol. 2 was cancelled, Flash appeared in the "Darkest Hours" Superior Spider-Man story arc, and worked with Scarlet Spider to save the Microverse from Carnage. Agent Venom then went on to join the Guardians of the Galaxy.

Following Secret Wars (2015), Venom got a new ongoing, Venom: Space Knight, as part of the All-New, All-Different Marvel relaunch. Following Civil War II, in which Venom returns to Earth, Venom Volume 3 by Mike Costa was announced, wherein the symbiote was separated from Flash and acquired a new, villainous host: Lee Price, a former Army Ranger able to dominate the symbiote with his will... at least until it broke free and reunited with Eddie Brock. The series was given legacy numbering and eventually concluded in Venom: First Host. Venom Volume 4 by Donny Cates was launched as part of the Marvel: A Fresh Start relaunch in 2018, and was succeeded by Venom Volume 5 by Al Ewing, Ram V, and Bryan Hitch in 2021.

Eddie and Venom find themselves pulled into a strange new universe...

Eddie and Venom find themselves pulled into a strange new universe...