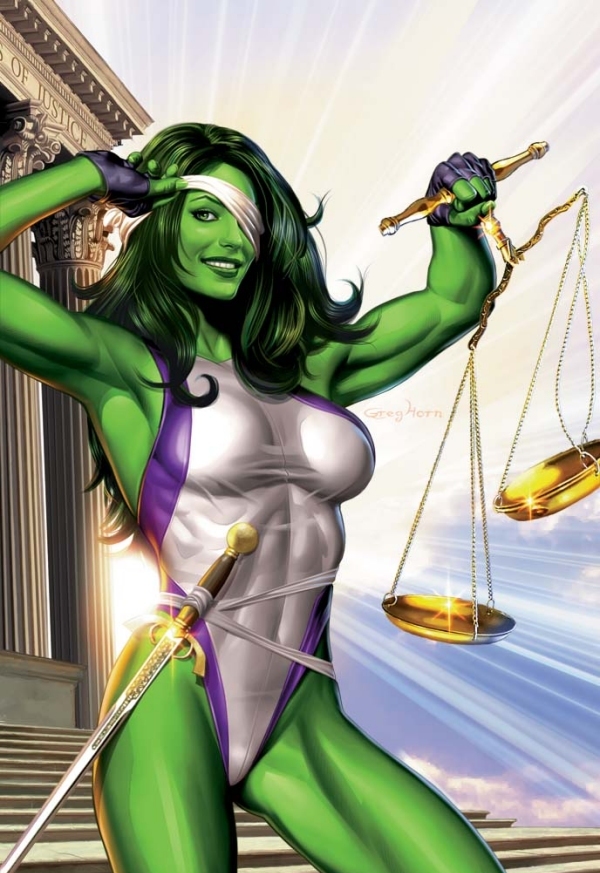 The strong arm of justice.
"She-Hulk has the potential to be our Wonder Woman. A powerful female with a strong moral center and a determination to do what's right. She's also a unique combination of brains and brawn. The ideal She-Hulk story is one that plays on both aspects of her make-up."
— Peter David

Once upon a time, there was Bruce Banner, whose gamma-irradiated blood made him The Incredible Hulk. He keeps going on about how you wouldn't like him when he's angry, but he's actually pretty damn popular. During height of the 1970s TV series, the same producers created a successful TV adaptation of Martin Caidin's Cyborg as The Six Million Dollar Man and, seeing an opportunity, created an original spin-off character: Jaimie Sommer's The Bionic Woman, which they owned completely.

Marvel Comics, knowing as they do the power of a Distaff Counterpart and not wanting to lose partial control of their franchise, were quick to snag the name She-Hulk for trademark reasons, which became Stan Lee's last original creation for Marvel. Thus, Bruce Banner's lawyerly cousin, Jennifer Walters, became gravely injured and received an emergency transfusion of his irradiated blood, becoming first The Savage, and then, eventually, The Sensational She-Hulk: "The Second Strongest One There Is". The character first appeared in Savage She-Hulk #1 (February, 1980), created by Stan Lee and John Buscema.

She-Hulk's Jekyll & Hyde tendencies are rather more subtle than the Hulk's. Jennifer Walters is a slightly timid, insecure lawyer who, under the effects of gamma radiation, can voluntarily transform into the seven-foot-tall green-skinned Amazonian Beauty. She-Hulk acts out the fantasies Jen finds too intimidating, becoming both a powerful warrior and a voluptuous flirtatious party girl. In fact, for a long time she was permanently stuck in her super-powered form and didn't mind at all, and friends and close allies regularly addressed her by her human name, thus implying — at least under most writers — that the only differences between the She-Hulk and Jennifer Walters personas were of physical nature. Retaining her human intelligence, she was able to pursue a successful career as a lawyer despite being a green-skinned amazon, and had a much better control of her temper than her cousin (although, for Jennifer Walters, it is fear that is the trigger of Involuntary Shapeshifting, not anger). She's a sex symbol both within the Marvel Universe and without. Oh, and occasionally she had romantic/erotic dreams of Hercules. Literally, since Herc exists as a real person in the Marvel Universe. About two decades after turning her into She-Hulk for good, the permanence of this state was reverted, and psychological problems that had never really been an issue before were introduced.

She's been a member of The Avengers as well as the Fantastic Four, Future Foundation, The Defenders, Heroes for Hire, S.H.I.E.L.D. and created the "Lady Liberators", to take down the Red Hulk. Her solo title got cancelled (for the fourth time), but she rejoined the Fantastic Four. After Fall of The Hulks and WWH, she's joined her cousin in the team book Incredible Hulks (written by Greg Pak), the first time they've been on a team together. She also co-starred with the Hulk's daughter Lyra in the mini-series She-Hulks (written by Harrison Wilcox).

During She-Hulk's second run under John Byrne, she became completely Fourth Wall Savvy, and once even ran across advertisements trying to reach the next page. (Meanwhile, in a guest appearance in the parodistic Damage Control title, her medium awareness was parodied, depicting her as a crazy lunatic who believes she's a character in a comic book. And the same issue subverted that by having her react to a caption pointing this out. Too bad she never had a crossover with Deadpool... until Marvel vs. Capcom 3, and later this

Byrne-inspired Variant Cover.) During the Dan Slott run, when Jen learns that Marvel comics are canon accounts of actual events & authentic enough to be admissible as evidence in court, she's asked if she possesses the ability of fourth wall breaking and she replies — while looking directly at the Fourth Wall — that of course she doesn't.

Charles Soule — himself a practicing attorney — launched a new ongoing series of Jen's solo title in 2014, placing an emphasis on her non-superhero occupation as lawyer and featuring Hellcat as her new private investigator. Due to low sales, the title only ran for twelve issues before getting canceled a year later.

Following the end of Soule's run on her title, Jen showed up in the pages of G. Willow Wilson's A-Force —Marvel's new (all-female) team of Avengers— as their leader. She'll also be a supporting character in Kate Leth's Patsy Walker, a.k.a. Hellcat! ongoing series, following Soule's lead in continuing Jen's newfound friendship with Patsy.

In December 2016, another comic was launched with She-Hulk as the lead, this time entitled simply Hulk. She-Hulk, after being in a coma due to the events of Civil War II and learning that she lost someone very close during it, must now process her trauma and learn to overcome her anger. Notable for leaning towards a darker storyline and having a grey She-Hulk, this book is written by Mariko Tamaki and drawn by Nico Leon.

In June 2017, Jennifer went back to being the normal green-skinned She-Hulk as part of the Marvel Legacy initiative. Hulk was retitled She-Hulk and given the Legacy numbering of #159 (combining all of her runs)

In modern comics, Jennifer Walters is one of two She-Hulks. The other one is Lyra, the young adult daughter of Bruce Banner and Thundra, who was raised 300 years into the future where the world is a matriarchy society that is at war with men. Lyra was a student at Avengers Academy and assisted Doctor Strange during the Serpent War. The two She-Hulks had starred in a mini-series titled She-Hulks.

Betty Ross had been turned into a "Red She-Hulk" for a few years as the result of the Leader's machinations before being depowered. She was a member of an incarnation of The Defenders and briefly starred in her own solo series.

Like her male counterpart, She-Hulk has appeared in Ultimate Marvel, though as always with an Ultimate Universe counterpart, there are some changes: Jennifer Walters is still involved, but not as She-Hulk; in this continuity, Jennifer Walters is no relative of Banner's and is, instead, a female scientist who manages to create an "improved" version of the Hulk serum that doesn't affect the subject's mind. However, it is Betty Ross who steals the serum and uses it to become She-Hulk. For more Information on them, see here