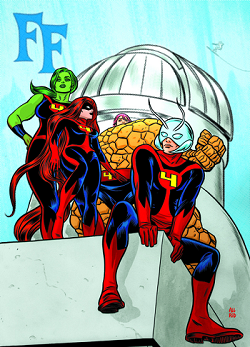 "There comes a time when each generation has outlived its usefulness and must be cast aside for the next one..."
— Reed Richards
Advertisement:

FF is a spin-off, and for a brief time replacement, to the Fantastic Four comic book. The title FF is a Punny Name that shares the initials of the parent title but can also stand for the Future Foundation, which is a Think Tank/school Reed Richards put together for genius or extremely gifted youth (including his own children) from all walks of life or like minded individuals.

The series started in May, 2011 and originally lasted for 23 issues. It initially replaced the main Fantastic Four ongoing, but eventually became a companion series that focused more on the Future Foundation kids themselves, while Fantastic Four focused on the adult characters.

The second volume was written by Matt Fraction and illustrated by Michael Allred as part of Marvel's Marvel NOW! initiative. The series ended after 16 issues due to the events of Inhumanity taking away Medusa and most of the Inhuman cast.

Reed Richards decides to take his family on a trip though time and space, claiming it to be a sort of vacation throughout the multiverse but really he discovered his family is dying from the very cosmic radiation that gave them their powers and wanted time to try to fix things. So while the Richards family, along with Ben and Johnny, are supposed to return four minutes after they leave, Reed has each member pick a replacement to fill in for them while they are gone should something go wrong, as well as watch over the Future Foundation. They are...

Weeks later, the new FF watch Marvel's First Family head into a portal in the sky, expecting to see them four minutes later. Naturally, they don't return, and the FF are left to take their predecessors place and fill their rather large shoes, as well as deal with a much older Johnny Storm who proclaims the rest of the team is dead.

Has nothing to do with the Future Foundation in the Danganronpa franchise.