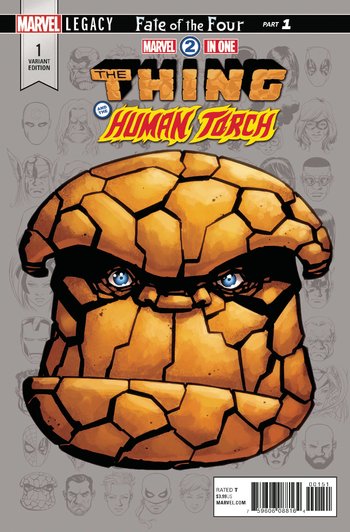 It's teamin' up time!
Advertisement:

Marvel Two-in-One is a Marvel Comics title that usually features Fantastic Four member Ben Grimm —The Thing himself — teaming up with various characters of the Marvel Universe.

After a brief test run in the last two issues of Marvel Feature, Two-in-One officially replaced the former in January 1974. Capitalizing on Thing's popularity with younger readers, Two-in-One was generally used to introduce new characters, or reintroduce obscure ones. His gruff, abrasive personality also led to many entertaining matchups, providing further fodder for the series as it ran.

Because of its anthology comic nature, Marvel Two-in-One has been written and drawn by many creators over the years, including (but not limited to) the likes of Jack Kirby, Chris Claremont, Steve Gerber, Bill Mantlo, John Byrne, Frank Miller, and George Pérez.

Marvel Two-in-One ultimately lasted a hundred issues and seven annuals, getting replaced by a Thing solo series in 1983, which in turn ran for three years.

In 2017, it was announced that a revival of Two-in-One, stylized as Marvel 2-in-One, would be written by Chip Zdarsky, as part of the Marvel Legacy initiative. The main thrust of this new series pairs Thing with the Human Torch (and later, Doctor Doom's Iron Man) as they search for the rest of their missing F4 family through the vast multiverse. Despite its initial premise, 2-in-One continued even after the Fantastic Four's return in August 2018, but officially ended in January 2019.

Compare with Marvel Team-Up, which involved Spider-Man pairing up with another hero (and yes, Ben and Spidey occasionally joined up in each other's books, even having a crossover that debuted in MTIO #17 and ended in MTU #47).