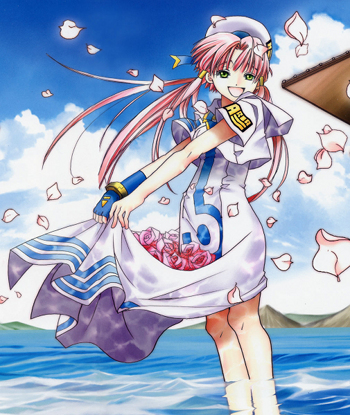 A face as fresh as flowers.
Advertisement:

Just like blue-haired girls are often withdrawn and anxious, pink-haired girls are often cheery and optimistic or sweet and romantic. There's a high chance that, if a series has a Five-Man Band, a girl with pink hair is The Chick. It's also a popular hair color for protagonists of Magical Girl series, hence Pink Heroine.

Bonus points if she has a blue-haired love interest. She may also have Innocent Blue Eyes, both to reinforce the impression of innocent sweetness and to provide a distinctive visual contrast.

This trope is most commonly found in anime and Animesque media. This is because it is not a natural hair color, which leaves it out of most live-action media, doesn't fit in most Western comics and animation that tend to have muted colors, and cannot be relied upon by most manga since they are printed in monochrome.

This trope doesn't count just for general pink hair. Other shades like magenta or salmon also count, but purple certainly does not. Pink-haired boys can also be examples.

Sometimes, Yandere characters who have pink hair can subvert the "sweetie" part, culminating to Psycho Pink.

Sub-Trope of Pink Means Feminine, and Cheery Pink. For animals with pink fur, go see Amazing Technicolor Wildlife. (Note that the two can overlap if anthropomorphism is in effect.)