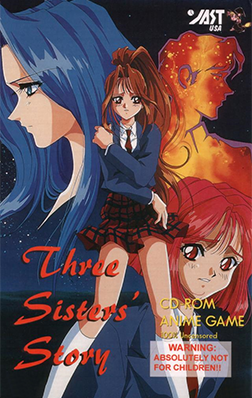 Three Sisters Story is an adult Visual Novel published in 1996 by Sakura Soft and was translated into English by Jast USA. It is a PC game which is widely available on Abandonware sites today.

The background story is that the three sister's father is suspected to have been the reason Koichi and his older brother Eiichi's father committed suicide. Both were put in foster care. Ten years later, Eiichi, now the owner of a company, came to Koichi, who was still in high school, saying that he had found the man. Koichi befriended the three sisters in hopes of getting revenge for his family, but he wasn't expecting to fall in love with one of them.