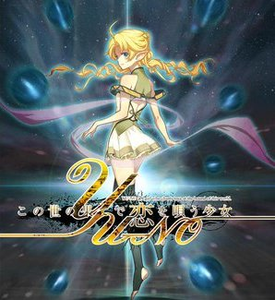 "What if there were multiple paths in which the past could form the present? What could be called history in that case... would it be the records of mankind's transitional phases? No. As that would it naight but a record of the events that ocurred at some point in time. That's not history. You must realize that the passage of time exists not as an irreversible, but reversible concept. But wouldn't that imply that it's possible to recreate history...? That's not quite right. History is an irreversible concept."
— Arima Koudai's letter
Advertisement:

YU-NO, short for Kono Yo no Hate de Koi wo Utau Shoujo YU-NO (A Girl Who Chants Love at the Bound of this World, YU-NO), is one of the early classic visual novels. Originally released in 1996 by ELF Corporation for the PC-98 with a port for the Sega Saturn, it remains a highly rated work and has strong elements of an Adventure Game of the Point-and-Click type. YU-NO was a pioneering visual novel, becoming a Trope Codifier for various tropes commonly used in visual novels and anime.

The story begins with the disappearance of the protagonist Takuya’s father, known to the world as an eccentric and controversial historian. Though he is presumed dead, Takuya soon receives a package from the supposedly deceased man containing an odd set of items the purpose of which Takuya does not recognize. After wandering about a little investigating, he winds up at the local landmark Triangle Mountain, which is a large rock of unknown origin that has scholars confused.

While at Triangle Mountain, Takuya first runs across a beautiful naked woman who after kissing him suddenly drops dead and vanishes completely. Confused, Takuya is then suddenly confronted by a former friend and colleague of his father named Ryuuzouji. With him is Takuya’s young stepmother, Ayumi, who appears to have no idea what is going on. After Ryuuzouji pulls a gun on Takuya and demands the odd package he received from his father, things take a turn for the bizarre as suddenly space seems to warp and Takuya is suddenly alone at Triangle Mountain.

Takuya arrives back home and makes a startling discovery: The device his father sent him is some sort of dimensional hopping device that allows a form of pseudo-time travel via alternate dimensions. After approximately 50 hours, Takuya will be looped back to Triangle Mountain without his memories and be forced to explore yet another alternate world. On the bright side, your inventory of items is retained from previous loops, which is pretty much necessary since there are multiple items you need in one route that you can only acquire in another.

A remake developed by 5pb. was announced in 2014

, and was released in Japan in 2017, with North American and European versions being released October 4th, 2019. It is based on the Saturn version, though with the 18+ content removed. A Retraux Gaiden Game, 8-Bit YU-NO's Great Adventure, was released at the same time and given for free to those who pre-ordered the remake on Nintendo Switch, and retells the story of the True route through a 2D platformer / Shoot 'em Up hybrid, out of all things.

The following tropes below appear in the first half of YU-NO. After this section of the story is complete, the story undergoes a shift into the True route, which is very spoilery and thus the details and tropes for that half are listed in a different folder below. As a side note, 8-Bit YU-NO's Great Adventure's premise also spoils the True Route, so tropes relating to this game have been put in a different folder as well: Open at your own risk.

After successfully gathering all the orbs he needs, Takuya is suddenly whisked to another world filled with a beautiful but strange forest, where he runs across a woman who either cannot or will not speak, though she understands what he says. Though he simply wishes to go home, the local knight is dying and presses him to take up watching over the land until he manages to return home, after which she dies, leaving Takuya and the silent girl alone.

After a brief period of angst and desperation, Takuya eventually settles into his new life. He and the quiet girl, Sayless, quickly fall in love and begin living together. Unfortunately, according to the late knight, Illia, Sayless is a priestess from the Imperial Capital whose duty it is to be the vessel of God in four years’ time in order to save the land from an imminent catastrophe. Surely things cannot continue so peacefully forever?