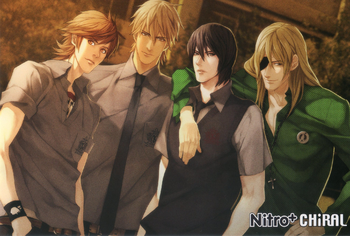 Ordinary High School Students? You wish.
"It's not romance, it's not even love. It's something much much deeper..."
— The official game website

The third Boys Love Game by Nitro+CHiRAL of Togainu no Chi fame, sweet pool begins with the return of Youji Sakiyama to his Catholic high school after being confined in hospital for a year. Suddenly he finds his life changing in unbelievable ways as his fate becomes entangled with his classmate Tetsuo Shironuma, upperclassman Zenya Okinaga and best friend Makoto Mita.

Sounds like your typical school boys' love setting right? Except that this being a nitro+ production means that the story is also infused with horror of the most potent kind. Filled to the brim with Primal Fear and Body Horror, all heightened with a brilliantly creepy soundtrack, this is definitely not a game for the faint-hearted.

The manga adaptation has been licensed in English by SuBLime. A series of Drama CDs that acts as continuations of the game's endings was released in 2010. Additionally, it was announced in February 2018 that JAST USA will be localizing

the Remastered version. It was officially released in December 19th, 2018.