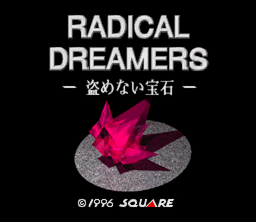 In 1995, SquareSoft (now known as Square Enix) released Chrono Trigger, a phenomenally successful RPG for the Super Nintendo. A sequel to Chrono Trigger was in the works for a while, but not in the way people might have expected. Rather than another console RPG, the sequel surfaced in the Japan-only Satellaview add-on for the Super Famicom. The device allowed players to download content and games, in a remarkably prescient precursor to current trends for home consoles, over ten years later.

One of the games Square released for the Satellaview was Radical Dreamers: Nusumenai Hōseki (The Unstealable Jewel). This is actually a Visual Novel, with mainly ambient music and dark, mysterious background images. Although there are no controls other than hitting the A button to select choices, there is a sort of pseudo-battle system involved, where the player must select actions to battle enemies, despite not having any visible Hit Points. It is possible to die this way and other ways as well.

The story involves a trio of bandits, the titular Radical Dreamers: Serge, the protagonist, Kid, a young girl with a short temper, and Magil, a mysterious magician, as they break into Viper Manor, home of the imposing Lord Lynx, on a quest to steal a treasure called the Frozen Flame. On the surface, it has nothing whatsoever to do with Chrono Trigger, but slowly, concepts from the previous game begin to be namedropped until the connections become clear. Yasunori Mitsuda, who composed the much-lauded soundtrack to Chrono Trigger, also composed the music for Radical Dreamers.

Fast-forward to 2000 when Square's PlayStation era was well underway. A full-blown sequel was announced for the PSX, called Chrono Cross. However, rather than being a brand-new game, it built off of elements from Radical Dreamers. This included plenty of shout outs, such as Viper Manor, Lynx, and the Frozen Flame, and lots of remixed music, including the main theme (which became the Alternate Universe theme, as opposed to the Chrono Trigger main theme which was the Home Universe theme). Despite the influence, Chrono Cross suggests Radical Dreamers is a (yet another) alternate dimension in the Canon; in Chronopolis, the party can actually find a terminal that repeats the Radical Dreamers introduction verbatim and the characters comment on it. In addition, the ending theme is called "Radical Dreamers: Le Tresor Interdit", a rough translation ("Forbidden Treasure") of the full title of the original.

RD contains one "main" story and, once it's finished, the ability to branch it off into seven wildly different stories that range from poignant to ridiculous.

Three years later, in 2003, a fan translation was created, allowing English-speakers to play Radical Dreamers for the first time on an emulator. The translators did their best to keep as many Chrono Cross aspects as they could, including the English names and Kid's Australian accent.

The game eventually got greenlit for an official English localization as part of the HD remaster of Chrono Cross for Nintendo Switch, PlayStation 4, Steam, and Xbox One, 26 years after its initial release. Notably, this makes it the second Stellaview game to get a re-release (the first being the BS Fire Emblem chapters, which were included in the 2010 DS remake of Fire Emblem: Mystery of the Emblem) and the first to come to the west.