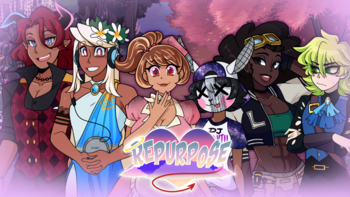 Repurpose is a dating sim set in the afterlife, set for a 2022 release. It's being created by Cereus Garden, a group whose members include Resident Rabbit/Eros (formerly known as Sensei Dezzy), Sam Rose, Sara Krebs, and TJ Lee.