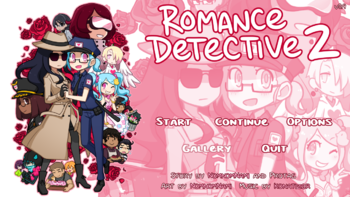 Romance Detective is a Ren'Py-based visual novel created by NomnomNami in 2014. It follows the adventures of Romance Cop, a newly transfer to the peaceful Lovebloom City, and her partnership with the eponymous Romance Detective, a suave yet oddball detective who specializes in crimes of passion. Together, they fight crime and also find love in each other. However, what started as a short series of love-related crimes soon proves to be a much bigger issue, as all of the roses from the city have suddenly developed mind-altering properties and make people fall madly in love and act with no self-restraint.

Shortly after that and for almost two years, NomnomNami and her partner started the development of a sequel, Romance Detective 2, but said sequel was cancelled due to disagreements with her partner and the artwork was never truly finished. The story, however, was complete (minus a few removed concepts) and fully playable despite certain moments where the characters appear as sketches. In this story, Romance Detective and Romance Cop, now an Official Couple, must investigate certain love-related crimes that, once again, are revealed to be a byproduct of the mind-altering roses.

Both visual novels have since been completely removed from NomnomNami's itch.io account, though the first novel can still be played online on sandbox-adventure.com

Both novels provide examples of: