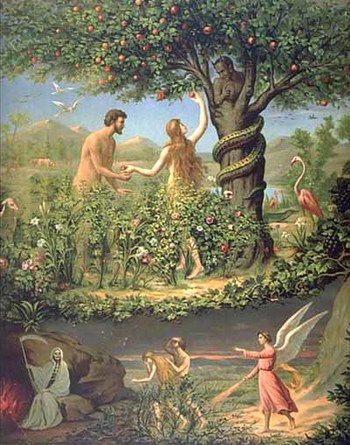 "That'll teach you for being too dumb to know better."
"Here, mankind's root was innocent; and here
were every fruit and never-ending spring;
these streams—the nectar of which poets sing."
— The Divine Comedy
Advertisement:

The Garden of Eden is a location in the Abrahamic Creation Myth. According to the Book of Genesis, it was a mythical paradise created by God, which he tasked the primordial man Adam to guard. Adam and his companion, Eve, were free to eat from any tree except the tree of knowledge of good and evil. However, they were tempted by the serpent into eating the tree's fruit (depicted as a Tempting Apple most of the time). Because of this defiance, the pair was thus expelled from the garden, essentially damning their descendants to burdened lives.

Because of its prominence in the Fall of Man, the garden's imagery lives on in many works of fiction as a symbol of temptation, the folly of man, and paradise lost. A beautiful, idyllic, sinless paradise can bear the garden's name. It can kick out its inhabitants if they break the rules, or it can be corrupted by humankind. More cynical works will see Eden as a restrictive place where man was not free to learn. Some works are subtle allegories to the Biblical legend, while others cherrypick the imagery (the serpent, the Tree, the Tempting Apple, etc.) without it necessarily meaning anything. This page covers all allusions to the legend.

In speculative fiction, Adam And Eve Plots may pair this with a New Eden.

Compare Adam and/or Eve and Forbidden Fruit. Subtrope of Biblical Motifs. See also other famous settings and events from Genesis that have their own pages — Creation Myth, the Tower of Babel, The Great Flood. Contrast Garden of Evil. See also The Promised Land, another purported ideal land from the Old Testament.

Can't have Adam's backstory without a glimpse of paradise.

Can't have Adam's backstory without a glimpse of paradise.