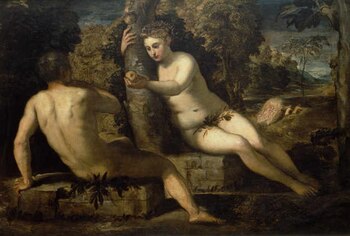 Eve offers a delicious apple to Adam.
Writers like to use the names Adam and/or Eve symbolically. Maybe they're the first of their kind, or the last; maybe they are the definitive uber-example of whatever it is they are; maybe they represent some kind of genesis or important change; or maybe it's not entirely clear what the symbolism is meant to be. Some of these Adams and Eves may need to watch out for snakes.
Advertisement:

In Hebrew, the names mean "From the Ground" (or "man") and "living"/"life," respectively.

Note that such naming may occasionally be coincidental; "Adam" is still a relativity common English-language name, though "Eve" is less so (which gets inverted in Spanish-speaking countrites, where "Eva" is a common name while "Adán" is actually almost unheard of).

Variations also count (e.g. Andrew/Andreas and Zoe, which are the Greek equivalents of the Hebrew names Adam and Eve).

See also Adam and Eve Plot and Name of Cain.