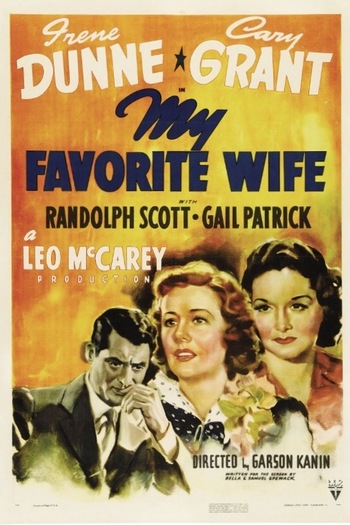 A 1940 Screwball Comedy film produced by Leo McCarey, directed by Garson Kanin, and starring Irene Dunne and Cary Grant. It is loosely based on the Narrative Poem Enoch Arden by Alfred, Lord Tennyson, but with a Gender Flip and Adaptational Alternate Ending.note (In the original, it is the man who returns after being shipwrecked, and when he sees his wife is happily married to someone else, he decides not to reveal himself.) Strangely enough, it opened just a couple of months after another film based on the same source material, Too Many Husbands.

Ellen Arden (Dunne) has been presumed lost at sea for seven years, so her husband Nick (Grant) has her declared Legally Dead and marries elegant but hard-edged Bianca (Gail Patrick). However, Ellen has actually been shipwrecked on a Deserted Island all this time — coincidentally, with handsome Stephen Burkett (Randolph Scott). Ellen and Stephen are rescued and come back on the very day of Nick and Bianca's wedding—but only after the ceremony itself. Hilarity Ensues.

Remade in 1963 as Move Over, Darling, with Doris Day, James Garner, and Polly Bergen in the lead roles.note Move Over, Darling was originally supposed to be titled Something's Got to Give and it was supposed to star Marilyn Monroe, Dean Martin, and Cyd Charisse. Monroe's inability to show up for work due to her drug use caused her to be fired from the movie shortly before she died of an overdose in 1962, after which the project was abandoned and then completely overhauled with a new cast.