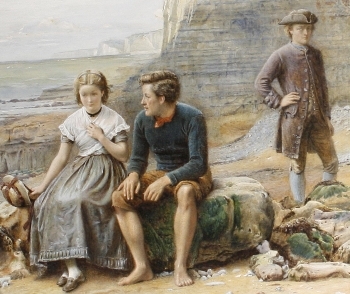 A Narrative Poem by Alfred, Lord Tennyson, written in unrhymed iambic pentameter. It was originally published in 1864. The complete text can be found online here

, or in ebook format here

The story takes place in the mid-18th century. Enoch Arden, Philip Ray, and Annie Lee are childhood friends. Both boys fall in love with Annie, but the more confident Enoch makes his Love Confession first, and Annie accepts his proposal. They share seven happy years of marriage together and have three children.

Enoch supports his family as a merchant sailor, but then he is injured and unable to work for some time. When he recovers, he signs on for a voyage to China with another captain in hope of making a large amount of money. He sells his own boat and uses the money to set up a shop for Annie so that she will have something to live on while he is gone. After a tearful farewell, he leaves.

Annie's business fails, and her sickly youngest child dies soon afterward. Philip, now wealthy, begs her to let him pay for the other children's education, as Enoch wanted them to go to school. Not wishing to cause gossip that would harm Annie's reputation, Philip rarely visits the house, but he watches over the family and provides for them. Finally, after Enoch has been gone for ten years, Annie reluctantly becomes convinced that he is dead, and she agrees to marry Philip.

Meanwhile, Enoch has been shipwrecked on a Deserted Island. He is eventually rescued, but when he returns to town, he is so changed by his experience that no one recognizes him. On learning that Annie has married Philip, he goes to Philip's house and peers through the window, unnoticed. He sees that Annie and Philip are very happy, with a baby son of their own, and that his own children now regard Philip as their father.

Enoch is devastated, but he resolves not to ruin their happiness by revealing himself. He stays in town doing odd jobs for a year, and then he falls gravely ill. Before dying, he confesses his identity to his landlady and asks her to convey his blessings to his children, Annie, and Philip.

The story was filmed three times during The Silent Age of Hollywood, in 1911, 1914, and 1915 (this one starring Lillian Gish as Annie). Richard Strauss composed incidental music for a spoken recitation of the poem in 1897. It also inspired the following other works:

The poem provides examples of the following tropes: