Film / Too Many Husbands 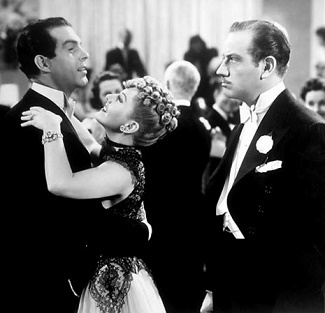 A 1940 Romantic Comedy film directed by Wesley Ruggles, starring Jean Arthur, Fred MacMurray, and Melvyn Douglas. Based on a play by W. Somerset Maugham—which in turn was loosely based on the Narrative Poem Enoch Arden by Alfred, Lord Tennyson—Too Many Husbands came out just a couple of months before another movie adapted from the same source material: My Favorite Wife.

A year after her husband Bill (MacMurray) has been reported drowned in a boating accident, Vicky Cardew (Arthur) has married his business partner and best friend, Henry Lowndes (Douglas). As Bill's name is being removed from the office doors, Vicky's father George (Harry Davenport) receives a phone call from Bill and is shocked to learn that he is alive. For the past year, Bill has been marooned on a Deserted Island and is now eager to return home to his wife. Bill tells his father-in-law that he will be arriving in town that night by airplane.

Vicky and Henry go to the airport to meet Bill, but neither one can summon the nerve to tell him what has happened. As Bill makes plans to spend his first night with his wife, they finally tell him the truth. Trouble begins when both husbands begin lavishing love and attention on their mutual wife, who refuses to decide between them and instead does her best to keep them both on equal terms.

When the husbands become pals for a night and walk out on Vicky to teach her a lesson, she calls the police. When asked her relationship to the missing men, she answers without thinking, "My husbands." Bill and Henry return eventually, but Vicky is unable to conceal her illegal living arrangement from the police and is hauled off to court. Although a judge decides that Bill is Vicky's legal husband, Henry refuses to admit defeat and continues to court her. Both men vow to keep Vicky happy in the future and share a dance with her to show the sincerity of their intentions.

Remade as the 1955 musical film Three for the Show, starring Betty Grable, Jack Lemmon, and Marge and Gower Champion.

The film profides examples of these tropes: