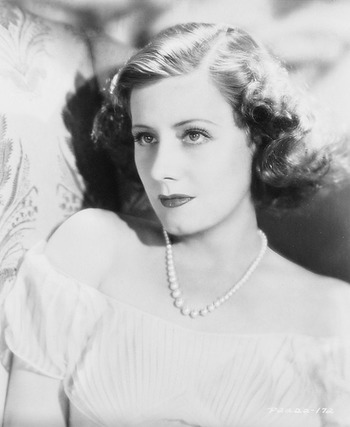 "The Irene I know is as vague as the absent-minded professor — and as adroit. She's casual as a Noël Coward heroine and as conscientious as a Salvation Army missionary. She's as fragile as Dresden and as strong as steel."
—Loretta Young
Advertisement:

Irene Marie Dunne (December 20, 1898 – September 4, 1990) was an American actress and singer famous during The Golden Age of Hollywood. She was nominated five times for an Academy Award but never won.

The Dunns (Irene put an “e” at the end when she entered the cinematic world) were a musical family, and Irene was taught singing and piano at an early age. Bent on being a professional singer (she had a soprano voice) and with a degree from the Chicago Music College, she hoped to sing with the Metropolitan Opera Company but was, unfortunately, turned down. Down but not beat, she went into musical theatre instead and became a sensation on Broadway with her biggest success being as Magnolia in Show Boat (replacing Norma Terris during the show's original run). In the late twenties, however, she was discovered by RKO and signed a contract with them.

During The Pre-Code Era, Dunne was put in pedestrian, dramatic fare, but with the advent of a new genre, the Screwball Comedy, Dunne began to shine in comedic vehicles, showing off her impeccable timing and wit. Although unwilling to go the comedy route, Dunne starred in the successful Theodora Goes Wild which was the stepping stone to greater things. The next year she co-starred with Cary Grant (a frequent co-star) in The Awful Truth. She reportedly didn’t like comedies much, preferring serious dramas, but she was considered a great comedienne, nevertheless.

Popular throughout The '30s and The '40s, Dunne was considered a great actress by the critics and her peers alike. A decline did come due to Hollywood's tendency to dispose of older actresses; however, Dunne decided to retire in the early fifties, her last film being It Grows on Trees.

She continued working, dedicating herself to charities. Also, she was chosen as the delegate to the United Nations by Dwight D. Eisenhower.