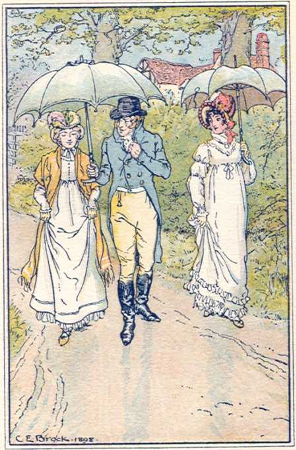 "With insufferable vanity had she believed herself in the secret of every body's feelings; with unpardonable arrogance proposed to arrange everybody's destiny. She was proved to have been universally mistaken; and she had not quite done nothing — for she had done mischief."
Advertisement:

Written in 1815, Emma is a novel that takes a slightly different take on Jane Austen's typical novel of manners. Instead of a plucky but poor heroine who must face off with a Rich Bitch, the heroine herself is the Idle Rich girl who means well, but ends up making life harder for the people around her.

Emma Woodhouse, who has been spoiled ever since she was a small child, had always had a penchant for ordering the world as she sees fit. So when she meets the sweet and pretty but slightly slow young Harriet, she decides that she will set her up with a husband worthy of her feminine charms. Hilarity Ensues, with zany schemes, terrible misunderstandings, gossip gone awry and, of course, since this is a Jane Austen novel, Emma needs to sort out her love life before it's too late.

There are quite a few adaptations:

These tropes find their match in the novel: