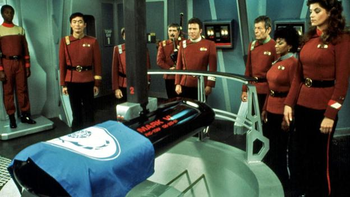 "We are assembled here today to pay final respects to our honored dead. [...] Of my friend, I can only say this: of all the souls I have encountered in my travels, his was the most... human."
"It is a far, far better thing that I do, than I have ever done; it is a far, far better rest that I go to than I have ever known."
—Commissioner Jim Gordon, The Dark Knight Rises
Advertisement:

An end-of-story memorial service given by a support or surviving major character in memory of less fortunate characters. May serve as a handy explanation of what would otherwise be a Gainax Ending to wrap things up and tell you that no, the heroes are not "just hiding", or merely an emotive, tragic summation on the sorry affair.

See The Hero Dies and Kill 'Em All for what may lead to this kind of ending being needed. May be used to prevent a Gainax Ending. Bittersweet Endings are the most common to feature this. See also To Absent Friends, which is closely related.

Note that this is both an Ending Trope and a Death Trope, so expect major spoilers... especially since the appearance of this trope is an indication that the main character might have bought it.

Star Trek II: The Wrath of Khan ends with Spock's funeral and a bagpipe version of "Amazing Grace".

Star Trek II: The Wrath of Khan ends with Spock's funeral and a bagpipe version of "Amazing Grace".