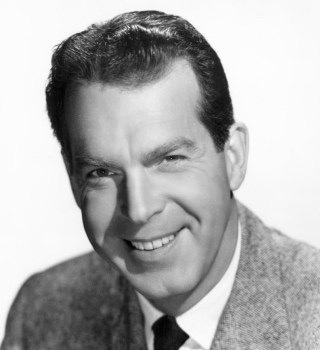 "I once asked Barbara Stanwyck the secret of acting. She said: 'Just be truthful – and if you can fake that, you've got it made'."
Advertisement:

Frederick Martin MacMurray Jr. (August 30, 1908 – November 5, 1991) was an American actor from The Golden Age of Hollywood, who today is probably best remembered for his role as the insurance salesman who helps Barbara Stanwyck's character commit insurance fraud in Double Indemnity. However, during his nearly 50-year career he performed in a variety of movies and television shows of numerous genres, from comedies (screwball, straight, and/or romcom) to dramas and westerns, possibly being one of the only actors to fall victim to both Tom Hanks Syndrome and Leslie Nielsen Syndrome, sometimes within the same few years.

He was also the first actor to be named a Disney Legend and also had a brief singing career in the early '30s with the Gus Arnheim and George Olsen orchestras. Unfortunately, he was a heavy smoker throughout his life and for many years suffered a variety of bad health, from leukemia to having a stroke; he eventually died of pneumonia.

In popular culture, he's said to be the artistic inspiration for Captain Marvel.