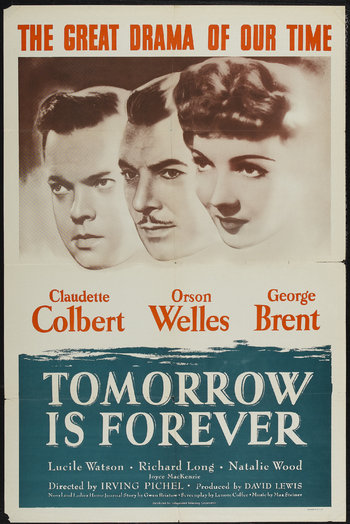 It is a loose adaptation of the narrative poem Enoch Arden. The story opens on Armistice Day, 1918. Elizabeth MacDonald (Colbert) works for industrial magnate Lawrence Hamilton (Brent). Her husband, John MacDonald (Welles), left for France a few months before. As the town giddily celebrates the end of the war, Elizabeth gets the dreaded telegram: her husband was killed in combat on November 5. Elizabeth makes her unsteady way back to work, only to faint on the stairs. It turns out that not only is she a widow, she's a pregnant widow.

Lawrence, who is a kindly man, takes Elizabeth into his household and helps her through her pregnancy and childbirth. Unsurprisingly he falls in love with her. They get married, and choose to let Elizabeth's son Drew think that Lawrence is her father. They have another son. Twenty years pass.

What Elizabeth doesn't know is that John isn't really dead. He winds up in an Austrian hospital, horribly scarred, with no ID on him. John, who doesn't want to come back to Elizabeth in that condition, refuses to reveal his identity. Eventually he assumes the name of "Erik Kessler" and becomes a chemist. When the Nazis take over Austria Erik gets out, fleeing to America, where he gets a job...with Lawrence's company.